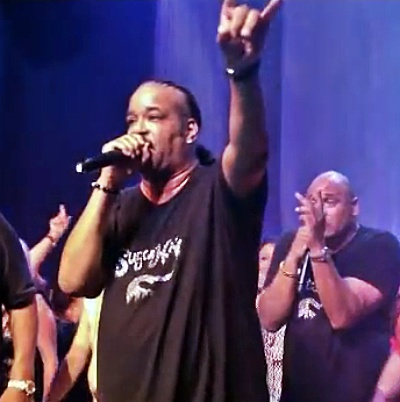 Joseph Robinson was a pioneer of hip-hop and owner of Sugarhill Gang Records. Robinson’s father was boxing champ Joe Robinson and his mother was singer Sylvia Robinson (“Love is Strange,” “Shame Shame Shame”). Joe died in 2000, Sylvia in 2011. Sylvia also co-wrote the Sugarhill Gang rap classic ‘Rappers Delight’.
Sugarhill Records Executive, Joseph Robinson, Jr., most affectionately known to most as Joey, succumbed to cancer yesterday afternoon at his home in Tenafly, New Jersey. Member of the legendary group, the Sugarhill Gang known for the multi-platinum single, Rapper’s Delight, Joey was also the son of the late legendary Singer/Songwriter, Sylvia Robinson.
As the Executor of the Sugarhill Music Publishing Estate, Joey was instrumental in keeping the legacy of his family in tact. With the birth of commercialized Hip Hop and Rap Music, he handled the royalties and music publishing whenever artists such as Alicia Keys, Jay-Z, Kanye West and Justin Timberlake sampled music from his family’s catalogue.
‘This is a major blow to the Robinson family,’ states rap recording artist, Juelz Santana. ‘My condolences go out to all of the friends, family members, and fans of the Sugar Hill movement.’ Born to musical legend, Sylvia Robinson, Joey leaves behind one brother, Leland Robinson, nieces, nephews, and a host of friends and family members who love him dearly.

Book your tickets for a trip to Vegas as early as possible as one of the world's best-selling artists of all time returns to Caesars Palace for the fourth year in a row. Earlier in the year, Rod Stewart and his 13 piece band kicked off 2015 celebrations with nine shows, and at the end of July they will be making their way back for another Las Vegas residency, that is currently the talk of the town. This time around, […]