I consider Lynn and Mentor friends. She will be missed. -Barry 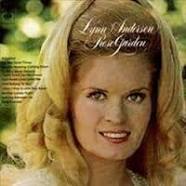 >Country singer Lynn Anderson, best known for her classic recording “(I Never Promised You a) Rose Garden,” died Thursday night of a heart attack at Vanderbilt University Medical Center. She had been hospitalized for pneumonia following a trip to Italy. She was 67 years old.
Lynn Rene Anderson was born Sept. 26, 1947 in Grand Forks, N.D., and raised in California. She came from a musical family: Her parents Casey and Liz Anderson were both songwriters; the latter penned the Merle Haggard hits “(My Friends Are Gonna Be) Strangers” and “I’m a Lonesome Fugitive.”
Ms. Anderson’s debut single, a duet with Jerry Lane called “For Better or for Worse,” was released in 1966, when she was just 19 years old. It failed to chart. However, later that year her single “Ride, Ride, Ride,” cracked the country charts, and its successor, “If I Kiss You (Will You Go Away)” was a Top 5 hit.
For two years during the late 1960s, Ms. Anderson was a regular on the popular “Lawrence Welk Show,” an outlet which exposed her to a nationwide audience. “It was appointment viewing,” said WSM DJ and Grand Ole Opry announcer Eddie Stubbs. “Lynn Anderson really helped expand the boundaries of country music because there wasn’t a lot of (it) on network television at that time.”
Ms. Anderson wed producer/songwriter Glenn Sutton in 1968. He produced several of her hit songs—and wrote some too, including “You’re My Man” and “Keep Me in Mind”—but the couple would divorce in 1977.
In 1970, Ms. Anderson moved from California to Nashville, and signed with Columbia Records. In October of that year, she released what would become her signature song, and one of country music’s classics. The lilting “(I Never Promised You a) Rose Garden,” penned by Joe South, became a worldwide hit with its immediately recognizable intro and catchy lyrics. In the U.S., it spent five weeks atop the country music charts and crossed over to the pop charts as well. The recording also netted Ms. Anderson a Best Female Country Vocal Performance Grammy Award, and in 1971, the Country Music Association named her Female Vocalist of the Year. Over the last four decades, “Rose Garden” has been covered numerous times by a wide variety of artists including k.d. lang, Martina McBride, Suicide Machines and Southern Culture on the Skids. The 80s Kon Kan hit, “I Beg Your Pardon” famously sampled her song.
Her popularity began to fade during the second half of the 1970s, and in 1980, she released her final recording for Columbia. After a short hiatus from recording, Ms. Anderson returned to music and signed with Permian Records. It was with this label that she released her final Top 10 single, “You’re Welcome to Tonight” (a duet with Gary Morris) in 1983. Since then, she’s recorded a handful of albums, including the Grammy-nominated “Bluegrass Sessions,” in 2004.
This summer, she seemed poised for a comeback: in June of 2015, she released the inspirational gospel album “Bridges,” which garnered positive reviews, and appeared at the CMA Music Festival.
Ms. Anderson was also a horse breeder and an award-winning, lifelong equestrian who became involved in therapeutic horse riding programs for disabled and troubled children.
She is survived by her father, three children—Lisa Sutton, Melissa Hempel and Gray Stream—four grandchildren and her partner Mentor Williams, who wrote the classic song “Drift Away.” Funeral services will be held at Woodlawn-Roesch-Patton Funeral Home and Memorial Park.

Janis Ian has revealed her own story about Bill Cosby telling fans that she was banned from his show because he thought she was 'probably a lesbian'. On November 24, 1967, Janis Ian appeared on the CBS series The Smothers Brothers Comedy Hour where she performed her hit from the previous year, Society's Child. Ian was only 16 at the time and was on an extensive round of appearances that had left her exhausted. After the show, she fell asleep […]