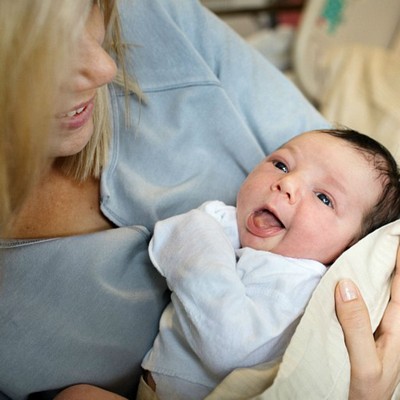 Billy Joel’s wife has shared the first picture of ‘absolutely perfect’ daughter Della Rose. Alexis Roderick, 33, and her 66-year-old husband welcomed the baby, their first child together, into the world on Wednesday. And just days after becoming a mother, Alexis took to her Instagram account to tell fans just how much Della has changed her life.
‘Della Rose Joel. Thank you for all the love!’ Alexis wrote. ‘She’s absolutely perfect! Busy, busy, here at the Joel home but I wanted to share a pic. Love, Alexis.’
In the shot, Alexis is seen wearing a blue top as she cradles the newborn, who is wearing a white top with her nappy. Della also has a full head of jet black hair.
The tot was born at 2.40am in New York and weighed 7 lbs., 6.5 oz, the singer’s representative confirmed to People magazine earlier this week.
Billy already has daughter Alexa Ray, 29, from his second marriage to model Christie Brinkley.
But he said after the couple revealed the pregnancy news that he was hoping to concentrate on fatherhood and become something of a stay at home dad this time around.
‘I’m probably going to be able to spend more time with this kid than most people are able to spend with their children, because I don’t have a regular job,’ he added to Newsday. “I could be a stay-at-home dad for as long as I can stay alive.’ Billy and Alexis have been together since 2009.
Billy has been married three times before, prior to meeting Alexis. Elizabeth Weber Small was his first wife in 1973, followed by model Christie in 1985, then 23-year-old Katie Lee in 2004 when he was 55. The couple split in 2009 after five years of marriage.

Bryan Adams will release his 13th studio album, Get Up, in October. Produced by Jeff Lynne of ELO and the Traveling Wilburys, Adams co-wrote the new songs with long-time collaborator Jim Vallance. It includes the fast and furious up-tempo tracks such as lead song Brand New Day, You Belong To Me and Thunderbolt, to the gentler songs such as Don't Even Try and We Did It All, plus the alternative Adams-produced acoustic versions, highlighting Adams' unique voice and depth. Adams […]