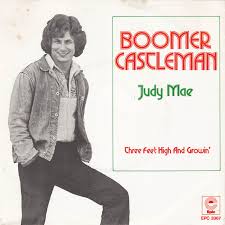 Our pal Boomer Castleman died of cancer on September 1st. Owens Boomer Castleman grew up in Farmer’s Branch and North Texas before heading for California in the 1960s and hitting Music Row in the 1970s.
Castleman’s only solo hit song was “Judy Mae,” which climbed to No. 33 on the Billboard country chart in 1975. It was banned at many radio stations because of subject matter. He later produced Meri Wilson’s novelty million seller, “Telephone Man.” It was also banned but became a huge hit. Boomer also played guitar on Michael Murphey’s 1975 smash “Wildfire.”
While Castleman never stopped performing, he is probably most widely known in music circles for inventing the Palm Pedal in the 1960s. The device allowed guitar pickers to make sounds like a pedal steel. He also started BNA Records in Nashville. Artists who signed with the label at some point in their careers included Kenny Chesney and John Anderson. Castleman sold the company in 1993.
A severe injury to the tendons in his left arm prompted Castleman to take up guitar at age 12 as a therapeutic tool in the 1950s. At 17 he played with a kid named John Deutschendorf from Arlington Heights High School in Fort Worth. Deutschendorf would later become John Denver, and Castleman could say he was there when the famous name change occurred. They were playing at a club in California, Castleman told Fort Worth Weekly writer Eric Griffey in 2008.
The club owner said “Deutschendorf” reminded him of a disease you might get in a third-world brothel. He suggested changing it to “Denver.”
“Everyone thinks it’s because of some Rocky Mountain high, but that’s not true,” Castleman said. “That’s the single most unique event in my musical career.”
Another band known as The Survivors paired Castleman with Michael Nesmith before the guy with the toboggan would became famous as a Monkee.
Afterward, Castleman started a band with Murphey. They performed as The Lewis and Clark Expedition in the 1960s and co-wrote several songs. Along the way Castleman played guitar in recording sessions with the likes of Linda Ronstadt, Kenny Rogers, George Jones, Tammy Wynette, and David Allan Coe.
Castleman, always looking for a laugh, said he liked being referred to as a one-hit wonder: “I think I’m in good company, because look at Francis Scott Key.”

Season 21 of Dancing With the Stars is starting to look like a gathering of veteran music artists. It has been revealed that Nick Carter from the Backstreet Boys would be competing on the show when it premiers on September 14 and, today, you can add Chaka Khan to the list. Khan was an original member of Rufus who signed with ABC Records in 1973. During her ten years with the group, they had such hits as Tell Me Something […]