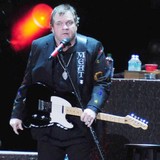 Meat Loaf can’t understand why people have been hostile since he sang through a vocal haemorrhage. The American musician is famous the world over thanks to his powerful voice, producing hits such as “Two out of Three Ain’t Bad” and “Paradise by the Dashboard Lights;” but having such impressive singing skills hasn’t been without its problems.
“Yeah, when you’re 26, your voice has a certain timbre. When you’re 68, your voice no longer has that timbre. I’ve had three vocal surgeries now, and three sinus surgeries. Adele cancelled a tour with a haemorrhaging vocal cord, I did a tour in Australia with a haemorrhaging vocal cord. I was spitting blood every night on stage,” he told Billboard. “And I’ve got nothing but grief and major hostility. I gave those people everything I had and more. I had flown 44 people to Australia, we’re all sitting there. Insurance wouldn’t cover the band and everybody going back, so I just said, ‘OK, let’s go.’ In New Zealand at the last show, I was warming up, and it was like you’re slicing a vegetable and you cut your finger really bad and it’s bleeding everywhere, that’s how blood was coming out of my throat. It was just running out of my throat.”
Meat Loaf has been performing for decades now, first playing shows with his band in 1967. It isn’t just music which has made him famous; the star is also a fully-fledged actor. The Rocky Horror Picture Show is arguably his most popular flick and celebrates its 40th anniversary this year. Meat Loaf hinted at how the cast of the movie have celebrated the occasion.
“I just flew to LA and we did an Entertainment Weekly shoot with Tim [Curry], Susan [Sarandon], Barry [Bostwick], me, and Pat Quinn. And I just got an email, Entertainment Weekly wants an interview with me, and Jimmy Fallon wants me to come on The Tonight Show, so we’ll see if we can work those in,” he smiled.

Our pal Boomer Castleman died of cancer on September 1st. Owens Boomer Castleman grew up in Farmer’s Branch and North Texas before heading for California in the 1960s and hitting Music Row in the 1970s. Castleman’s only solo hit song was “Judy Mae,” which climbed to No. 33 on the Billboard country chart in 1975. It was banned at many radio stations because of subject matter. He later produced Meri Wilson's novelty million seller, "Telephone Man." It was also banned […]