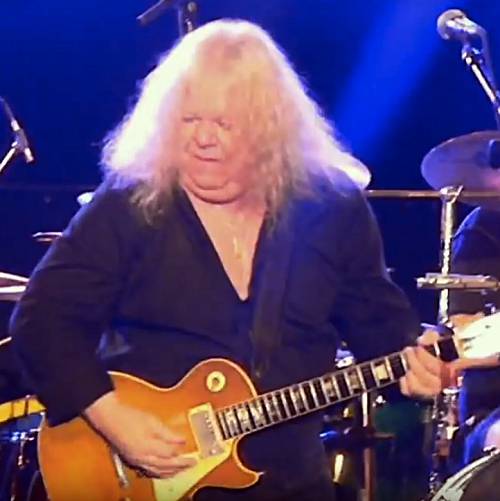 Gary Richrath, lead guitarist from REO Speedwagon until 1989, has died at age 65. Richrath wrote the REO Speedwagon hit ‘Take It On The Run’ and sang lead vocals on the songs ‘Find My Fortune’, ‘Only A Summer Love’.
In a Facebook post REO Speedwagon singer Kevin Cronin wrote, ‘My longtime friend and collaborator Gary Richrath passed away earlier today. I feel so sad. Gary was both a unique guitarist and songwriter, and the embodiment of the tough guy with a heart of gold. I learned most of what I know about being in a rock band from Gary Richrath. The entire REO Family mourns his death and shares in the grief of his family, friends, and fans. These words do not come close to expressing the depth of emotions I am feeling at this time.kc’
Gary Richrath joined REO Speedwagon in 1970, replacing Steve Scorfina who left for Pavlov’s Dog. In his tenure with REO Speedwagon, Richrath recorded 12 albums, the final in 1987 being ‘Life As We Know It’. He went on to form his own band Richrath.
REO Speedwagon had 12 Top 40 hits in the USA in Richrath’s time including ‘Keep On Loving You’ (1980), ‘Take It On The Run’ (1980) and ‘Can’t Fight This Feeling’ (1984).
Richrath performed one last time with REO Speedwagon in 2013 in Bloomington, Ill for Rock to the Rescue.

Whitney Houston's estate has announced the late singer will be returning as a hologram. The legendary songstress passed away at the age of 48 in 2012. But fans will be seeing her likeness perform again as the star's sister-in-law Pat Houston, who is also the President of the Whitney Houston Estate, revealed the family is working with Hologram USA on a new three-dimensional laser image of the Grammy-winner. 'It's a great opportunity for her fans to see a reinvention of […]