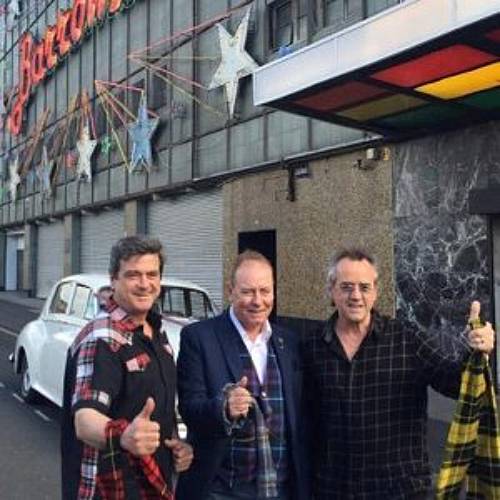 Three members of the classic lineup of the Bay City Rollers, Les McKeown, Stuart Wood and Alan Longmuir, have announced that they are reforming the band.
The announcement came at a press conference on Tuesday in Glasgow, Scotland where McKeown said ‘You think we’re doing it for money but we’re doing it for the glory of Scotland and the glory of the tartan. Taking the Scottish name all around the globe. That’s what we’re doing it for . to see our fans again one more time.’
It will all start on December 20 when the band will play a show at the Barrowland Ballroom in Glasgow with the possibility that additional dates at the venue could be added. Also on tap is a possible new single, Boomerang, along with other new music and a world tour.
Drummer Derek Longmuir will not be part of the reunion; however, the other three members have left the door open for the return of Eric Faulkner who has been working as a folk musician.
Alan Longmuir was a member of The Saxons, formed in Edinburgh, Scotland in 1966 with his brother Derek and Gordon Clark. Eventually changing their name to the Bay City Rollers, that lineup had the band’s breakthrough hit, Keep on Dancing, in 1971, going to number 9 in the U.K.
Their second hit didn’t come until 1974, Remember (Sha-La-La-La) (#6) but, before it hit the charts, Clark decided to leave the band, being replaced by McKeown in late 1973. Wood joined in early 1974.
The new lineup recorded the album Rollin’ which not only contained Remember but three more hits, Shang-a-Lang (1974 / #2 U.K.), Summertime Sensation (1974 / #3 U.K.) and All of Me Loves You (1974 / #4). Also on the album was Saturday Night, a non-hit in the U.K. but the song that would bring them fame in the U.S. when it went to number 1 in 1976.
Between 1971 and 1976, the Bay City Rollers had ten top ten hits in the U.K. and three in the U.S., including the British number 1’s Bye Bye Baby and Give a Little Love (both 1975).

Barbra Streisand has agreed to direct an episode of her husband, James Brolin's, new CBS series "Life in Pieces." The only stipulation is that CBS pickup the show for the 'back nine', industry lingo for ordering the last nine episodes of a season of a show. Many programs, especially in their first year, are picked up on a limited basis with their ratings success determining if they will be back for episodes 14 through 22. If all goes well, this […]