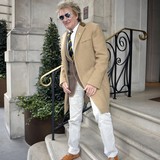 Rod Stewart was too “busy being a rock star” to spend time with his children. Rod admits he was unable to pen tracks about his kids 20 years ago because he was “writing about dirty weekends” but says now he’s older, he’s happy to make his heart an “open book”.
He shared: “Twenty years ago, I couldn’t have written a song about putting my son to bed. I was so busy being a rock star writing about dirty weekends that it wouldn’t have felt right.
“Now I’m of the age where I can sing about whatever I want. I suppose the older you get, the more your heart becomes an open book.”
And the 70-year-old rocker also opened up about family life with his third wife Penny Lancaster and their children Aiden, four, and Alastair, nine.
He told The Sun newspaper: “Well, actually it drives me up the wall sometimes. The four-year-old has got the devil in his system. Probably because he’s seen Spiderman, he climbs up everywhere. A year ago he was dressing up as Mary Poppins and if I show him pictures of that now, he gets so embarrassed.
“I feel sorry for Penny sometimes. Last night, I was really stroppy, my elder son was stroppy, the little one was stroppy and she was just a jolly person trying to make everybody happy.
“It’s funny how kids take it out on their mums. My ten-year-old shouts at his mum and she does everything for him. She blew up his iPad because it’s American and she tried to plug it in here in England.”

Cory Wells, one of the trio of singers in Three Dog Night, has died. He was 74. A former guest on "The Lost 45s", Wells died unexpectedly yesterday in his home in Dunkirk, N.Y. The band had postponed several shows last month, claiming that Wells needed treatment for a nerve problem in his back that was causing him problems. Three Dog Night paid tribute to Wells on their Facebook page, with an official statement by Wells’ longtime bandmate Danny Hutton, […]