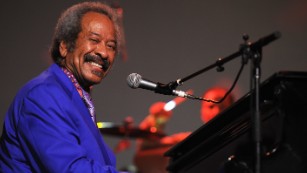 (CNN) Influential New Orleans songwriter, musician and producer Allen Toussaint died Monday of a heart attack, his son said in a statement Tuesday. Toussaint, 77, had been touring in Madrid, Clarence Toussaint said in the statement.
Artists in nearly every major genre recorded Toussaint’s songs or collaborated with him, including the Rolling Stones, the Yardbirds, Herb Alpert, Glenn Campbell, Robert Palmer and Alison Kraus and Elvis Costello.
They included the widely recorded “Fortune Teller,” Campbell’s chart-topping crossover version of “Southern Nights” and Leo Dorsey’s 1966 cover of “Workin’ in a Coal Mine.”
His music, often by way of his house band The Meters, was also widely sampled by hip-hop artists such as Amerie, Public Enemy and N.W.A.
“I don’t want y’all thinkin’ ‘this is just some old legend that passed away’ naw,” Questlove, founding member of the hip-hop group The Roots, wrote on Instagram. “This dude wrote some of your favorite music & you just didn’t know it.”
Toussaint’s influence is woven through popular music and hip-hop, he wrote.
“At least 12 ‘Get Out My Life Woman’ snares were like starch in hip hop’s daily nutritional chart — meaning so there you barely notice it,” Questlove wrote.
British singer Billy Bragg also lamented Toussaint’s death on Twitter.
“The man was a genius,” he said. Toussaint also was a well-regarded performer in his own right. His 2012 jazz album, “The Bright Mississippi,” showcased “what an idiosyncratic, inventive instrumentalist he is,” Allmusic critic Stephen Thomas Erlewine wrote at the time.
Toussaint opened a recording studio, Sea-Saint, in 1973 with partner Marshall Sehorn and operated his own record label.
Artists including Dr. John, the Neville Brothers, Paul McCartney, Paul Simon, Robert Palmer and Labelle recorded at the studio, according to Toussaint’s biography for the Rock and Roll Hall of Fame, into which he was inducted in 1998.
After Hurricane Katrina destroyed his studio in New Orleans, he relocated to New York, according to his biography, and began a resurgent career as a live performer that continued to his death.
“After his hometown was battered by Katrina and Allen was forced to evacuate, he did something even more important for his city: He went back,” President Barack Obama said in 2012 in awarding Toussaint a National Medal of the Arts. “And since then, Allen has devoted his musical talent to lifting up and building up a city.”