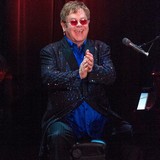 Elton John was left floored when bosses at his longtime label Capitol Records dumped him after hearing his new album, “Wonderful Crazy Night.”
The rocker was really proud of the “upbeat” songs on his first new album since 2013’s The Diving Board and felt sure the record executives would too – but they didn’t hear enough commercial potential, and dropped the star.
“I was gutted, I have to say,” Elton tells Rolling Stone magazine. “I knew it was a f**king good record.”
The singer/songwriter eventually signed with Island Records and was thrilled when label bosses there seemed thrilled about the album, which is scheduled for release in February.
“I can ask for no more,” he adds.
But he does accept Wonderful Crazy Night isn’t going to be among his bestselling albums, adding, “I follow the charts and know everything about this business. I’m not expecting to sell a million records.”
Meanwhile, Elton’s longtime songwriting partner Bernie Taupin insists the rocker will never retire or quit making new music, like pianist pal Billy Joel, no matter how much an album flops.
“You can be Billy Joel and stop making records, but if you have that drive and passion, you’re going to do it whether it sells or not. It’s there inside of you, and if you don’t get it out, you’re going to explode.”
Bernie, who has provided lyrics to Elton’s melodies for decades, admits he was thrilled by the new project when his partner came to him with an idea about an album full of uplifting new songs.
“I think he felt ‘There’s enough pain and suffering in the world without my contributing to it’.”
We’ll buy it!

You're so vain, Warren Beatty, you probably think this story's about you. And you would be partially correct. In anticipation of her upcoming memoir, "Boys in the Trees," singer Carly Simon talked to People about her iconic 1972 song "You're So Vain" and the fact that part of it is about actor Beatty, a former love of Simon's. "I have confirmed that the second verse is Warren," Simon said. The second verse includes the lines: "You had me several years […]