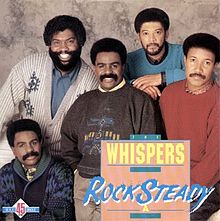 Nicholas Caldwell, one of the founding members of the classic R&B group the Whispers, died Tuesday of congenital heart failure in San Francisco, according to the Associated Press. He was 71 years old.
The group began with Caldwell, brothers Walter and Wallace Scott, Marcus Hutson, and Gordy Harmon in 1963, performing in clubs in Watts, California, and the Bay Area. Just under a decade later, the group scored its first top 10 R&B hit with the wistful “Seems Like I Gotta Do Wrong.”
Their self-titled ninth album, released in 1979, was their first to go platinum. One song in particular, “And the Beat Goes On,” found a second life with Will Smith, sampling it for his own track “Miami.” In the 80s, they scored their biggest hit with “Rock Steady.”
The band has stayed active, playing as recently as Saturday in Hammond, Indiana. After Hutson’s death in 2000, the group consisted of Caldwell, the Scott brothers, and Leaveil Degree, who joined the group in 1973.

On demand 24/7 commercial free until 1/11 at http://www.lost45.com - Theme: Hit Remakes! Guests: Cat Stevens, Daryl Hall, Bonnie Pointer, Phil Margo of the Tokens and Rick Finch from the Sunshine Band! Plus, a three fer from the Queen of Soul, Aretha Franklin! And, the first charted mash-up, which comes from 1983 and a song for the late Natalie Cole! Listen now!