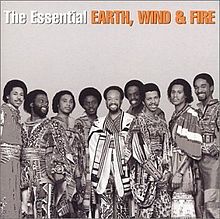 Maurice White, the founder and leader of the legendary R&B group Earth, Wind & Fire, has died. He was 74. White died at home in Los Angeles on Wednesday, his brother, group bassist Verdine White, told the Associated Press. Both brothers were frequent guests on “The Lost 45s!”
In 2000, just before EW&F was inducted into the Rock and Roll Hall of Fame, White disclosed to Rolling Stone that he had Parkinson’s disease. He was then 58 and had been diagnosed with the degenerative neurological disease eight years before but opted to keep it secret.
White announced in 1995 that he would no longer tour or perform with the group, leading to speculation about his health. But he remained active as a producer and songwriter.
“I just got tired of not talking about it,” White told Rolling Stone. “I had pretty much disappeared from the scene; a lot of people had not seen me in a long time, and they started wondering what was happening.”
A former session drummer who studied at the Chicago Conservatory of Music, White founded Earth, Wind & Fire in the late 1960s, taking the name from his astrological chart, which had no water signs.
Known for his inventive style, White guided the group’s blend of jazz, R&B, funk, soul, pop and even African sounds.
The group went on to sell more than 90 million albums worldwide, displaying a flashy and eclectic musical style that incorporated his influences from growing up in Memphis, Tenn., and working at the influential Chicago music labels Chess and Okeh.
The band’s many hits included September, Shining Star, Boogie Wonderland, Sing a Song, Reasons, and a cover of the Beatles’ Got to Get You into My Life and Boogie Wonderland.
Earth, Wind & Fire won six Grammys and was inducted into the Rock & Roll Hall of Fame in 2000.

NME is proud to announce it will be honoring Yoko Ono with The Inspiration Award at this year’s NME Awards with Austin, Texas on February 17. Yoko Ono, who will celebrate her 83rd birthday on February 18, is a true iconoclast who has had a long, varied and illustrious career. She has influenced, inspired and delighted several generations of musicians, artists and activists. These include David Bowie, Nile Rogers, Eric Clapton, Siouxsie and the Banshees, Lady Gaga and Boy George. […]