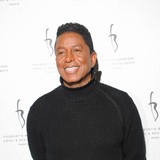 >>First off, we love Jermaine Jackson! His solo records are all amazingly overlooked as his talent. Second of all, I think Trump is the most un-American hating bully who possibly has ever run for this office. He is not a kind person. If you support him, sad to say, you are either uninformed or unpatriotic. End of rant.>>
Jermaine Jackson has attacked presidential hopeful Donald Trump for claiming his late brother Michael’s talents were wrecked by botched plastic surgery.
During CNN’s Town Hall with Anderson Cooper on Thursday night, Trump opened up about his friendship with the King of Pop, telling the newsman he knew “the real story” behind Jackson’s fall from grace.
Recalling the time Jackson lived at the Trump Tower in New York, the billionaire said, “He was an unbelievably talented guy… He lost tremendous confidence because of, honestly, bad-bad-bad surgery. He had the worst.
“He had people that did numbers on him that were just unbelievable… He was an unbelievable talent who actually lost his confidence. Believe it or not, when you lose your confidence in something, you can even lose your talent.”
But his recollections did not sit well with members of the Jackson family and on Friday, Michael’s brother Jermaine told TMZ.com the property tycoon was out of line to use his friendship with his late sibling to win votes.
“Name-dropping Michael don’t make you cool and won’t win you votes, especially when using botched facts,” Jermaine told the outlet.
The Jackson brother went on to insist the late musical icon’s confidence wasn’t affected by surgery of any kind, adding, “Michael’s confidence was affected by the pressures, injustice and vitriol of external circumstances. Period.”
It has never been a secret that Michael Jackson and Trump were close – the pop superstar even spent his honeymoon at the businessman’s exclusive Palm Beach, Florida estate, Mar-a-Lago, after exchanging vows with Lisa Marie Presley in 1994.

The late George Harrison will be heard again on a new song from the upcoming Eric Clapton album ‘I Still Do’. According to George Varga at the San Diego Union Tribune the album features the mysterious Angelo Mysterioso on vocals and guitar on the track ‘I Will Be There’. Angelo Mysterioso was a pseudonym Harrison used to use. He was under that name when he was a guest guitarist of Cream’s ‘Goodbye’ album. ‘I Still Do’ was produced by Glyn […]