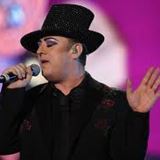 “Lost 45s” guest singer Boy George has put his past behind him, and now he’s urging others to do the same.
The 54-year-old Culture Club star spent several months in jail back in 2009 after falsely imprisoning a male escort, a bizarre crime fueled by drugs, but George, real name George O’Dowd, insists he is a changed man and he hopes the public will accept his transformation soon.
“I’ve done some amazing things,” he tells U.K. newspaper the Mirror. “I wish people would focus on that rather than the things that went wrong.”
Boy George has enjoyed a successful music career for over three decades, topping charts around the world with hits like Karma Chameleon and Do You Really Want to Hurt Me? He has also enjoyed success as an in-demand club DJ and he’s currently a coach on British TV singing competition The Voice.
The openly gay star believes his celebrity status has helped many people who have suffered in silence.
“I’ve affected change by just being myself,” he notes. “Back in the 1980s there were places I couldn’t go, like Argentina, but my music and my personality broke down those borders and when I could finally go, people would say, ‘I came out because of you, I changed my sex because of you’.”
Although he has certainly experienced some serious drama over the years, Boy George wouldn’t take anything back for a second and he has few regrets. The musician deeply appreciates all he has learned through his ups and downs, but if he had a chance to travel back in time, he would impart one important lesson to his younger self.
“If I was able to have the wisdom that I have now back then, what a luxury… (I’d) not make things into a drama that don’t need to be a drama,” he shares.
Boy George’s band Culture Club will be touring around the world this summer (16) following the release of their sixth studio album, Tribes.

The legendary Billy Joel set the record last July for the most shows by a single artist at Madison Square Garden with performance number 64. On December 17, that total will hit 81 when he once again takes the stage for his monthly “residency” at the venue. That will give the entertainer 36 straight months at MSG. Joel has proven himself to be one of the biggest entertainers of all-time with the long running series, one that he said he […]