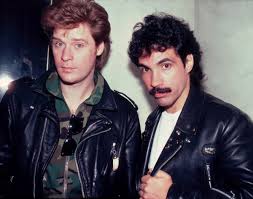 Daryl Hall & John Oates have moved into 6752 Hollywood Blvd. The dynamic duo now has a star on the Hollywood Walk of Fame.
“LA has a really special place in my memories,” John Oates said at the ceremony. “We recorded three albums out here in the mid-70s and it is always a blast to come out here”.
“I love Hollywood Boulevard. I’m going to have to come up here and put a Superman suit on and look at all the stars,” Daryl hall added.
Eurythmics legend Dave Stewart spoke at the ceremony. “When I arrived in New York I was in Hall & Oates land”, he said. “I secretly got all the albums, listened to them to see what I could steal for Annie and myself, to which you might recognize a lot”.
Daryl Hall and John Oates formed Hall & Oates in Philadelphia in 1970. They have had six Billboard number one hits in the USA with Rich Girl, Kiss on My List, Private Eyes, I Can’t Go for That (No Can Do), Maneater, and Out of Touch.
In 2002 Hall & Oates were inducted into the Songwriters Hall of Fame and in 2014 the Rock and Roll Hall of Fame. They are the third biggest duo of all time and have had 34 Top 100 hits, seven platinum albums, and six Gold records.

Prince's former lover and Purple Rain co-star Apollonia Kotero is suffering from a broken heart following the singer's death. Apollonia, who briefly dated Prince in the 1980s, wasn't ready to open up about her time with late singer when he passed away of an accidental drug overdose in April, but now she has taken to Facebook to write an open letter to her late friend and mentor detailing how she is dealing with his death. "My Dear Prince, I have […]