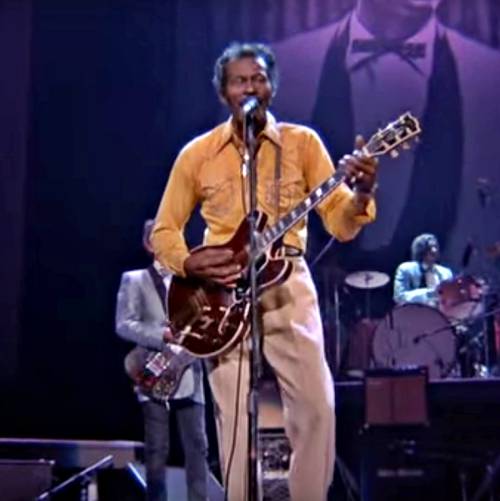 Chuck Berry, one of the pioneering artists in all of rock music, turns 90 today and to prove that its 90-years-young, he has announced a brand new studio album.
Chuck, out next year via Dualtone, is Berry’s first studio album since 1979’s Rock It.
While you would think that Berry would just rest on all of his accolades in his later years, he explained why he went back in the studio. “This record is dedicated to my beloved Toddy [wife of 68 years, Themetta Berry]. My darlin’ I’m growing old! I’ve worked on this record for a long time. Now I can hang up my shoes!”
Plus, to make this record even more amazing, Berry not only recorded the album but also wrote the songs and produced himself.
Berry’s band includes son Charles Berry, Jr., daughter Ingrid Berry, Jimmy Marsala, who has been with Chuck for over forty years, Robert Lohr and Keith Robinson.

Music mogul Clive Davis has shared a touching letter he wrote to Whitney Houston in 2001 in a new documentary. Shocked by her gaunt appearance at a Michael Jackson tribute concert, the singer's mentor put pen to paper and urged her to "face up to the truth" about her obvious substance abuse. The letter was never made public - until now. In the upcoming documentary Clive Davis: The Soundtrack of Our Lives, Davis reads the note he sent to Whitney, […]