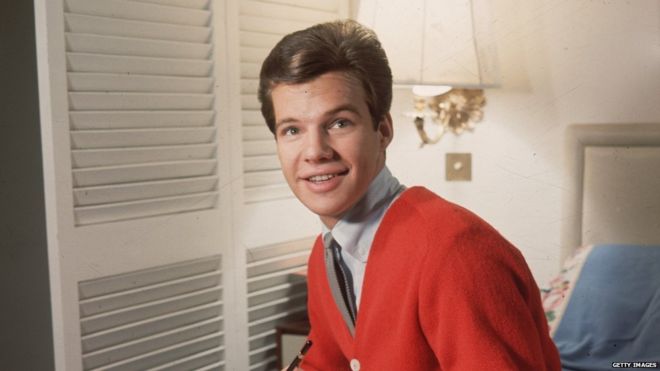 Bobby Vee, best known for hits including Rubber Ball, Take Good Care of My Baby and The Night Has a Thousand Eyes, has died at the age of 73. Vee released more than 25 albums during his career, retiring in 2011 after being diagnosed with early-onset Alzheimer’s disease.
Vee’s son Jeff Velline said the singer died peacefully surrounded by family on Monday. It was “the end of a long hard road”, Mr Velline said. He described his father as “a person who brought joy all over the world”, adding: “That was his job.”
Vee’s big break came about in 1959 at the age of 15 when he filled in for Buddy Holly after the singer’s death in a plane crash. Ritchie Valens and The Big Bopper were also killed in the accident in Iowa, along with the pilot, Roger Peterson.
A call went out for local acts to replace Holly at his scheduled show at the Moorhead National Guard Armory. Vee and his band, which had only formed two weeks previously, volunteered. Vee, born Robert Velline, also gave a young Bob Dylan his start.
Dylan played briefly with Vee’s band and he was the one who suggested Velline change his last name to Vee.
Bobby Vee and the Shadows were signed in autumn 1959 and Vee had his first hit in the Billboard charts in 1960 with Devil or Angel. A string of hits followed, including The Night Has a Thousand Eyes, Come Back When You Grow Up, Please Don’t Ask about Barbara and Punish Her.
Vee and his wife Karen were married for more than 50 years and had four children. She died of kidney failure in 2015, aged 71.
Vee had been in a care home near Minneapolis for just over a year and had been receiving hospice care before his death, Mr Velline said.

Pete Burns, lead singer of the 1980s British pop band Dead or Alive, has died. He was 57. According to a statement from his management team posted on the singer's official Twitter account, Burns died Sunday of "massive cardiac arrest." "All of his family and friends are devastated by the loss of our special star," the statement read. "He was a true visionary, a beautiful talented soul, and he will be missed by all who loved and appreciated everything he […]