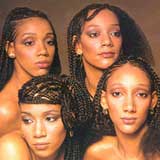 The legendary music group Sister Sledge are rumored to join London’s West End.
Siblings Joni, Debbie and Kim who rose to fame with smash-hits including ‘We are Family’ and ‘He’s the Greatest Dancer’ have revealed that they have been approached to work on a fantastic new musical to celebrate the girl band’s rise to fame.
Interacting with the media along the red carpet of Thursday’s star-studded Collars & Coats Gala Ball at the iconic Battersea Evolution in London, Joni revealed “We were recently approached by a theater producer in Chicago about doing a girl’s group musical, and I think that this would be fantastic.” The sisters have also revealed that they would ‘absolutely love’ to take the idea to a London stage and follow in the footsteps of hit musicals such as Thriller, Mamma Mia and Motown: The Musical.
Speaking about their love of the city and its culture, Kim said, “London is such a special place, it’s like our second home. I come here and all I want is some clotted cream and a scone… oh and fish and chips! The people are so warm. We have so many friends here, it’s like an extended family.”
The group were in the Capital to perform their very best and iconic hits at the annual Collars & Coats Gala Ball in aid of the Battersea Dogs & Cats Home last night.
Celebrating its eighth successful year, the high-profile event is a highlight of the autumn social calendar, and is consistently regarded as one of the most unique and eagerly anticipated charity events of the year. Speaking of their association with the charity, the sisters said, “We were delighted and honored to headline the Collars & Coats Gala Ball. Battersea Dogs & Cats Homes’ work in transforming the lives of abandoned pets is incredible. We feel privileged to collaborate with such an organization, which has committed to providing care, love and respect for vulnerable animals for over 150 years. These are three principles we have lived by throughout our lives and careers and strive to defend though our music.”

Pop star Cyndi Lauper's career successes have been overshadowed by bouts of depression and chronic psoriasis. The singer wasn't actually having much fun herself as her star rose in the 1980s and she reveals her depression hit her so hard she contemplated suicide. But Cyndi has always conquered the lows by grabbing onto family for help and trying to be as positive as she can. "There’s a lot of darkness (in life), but there’s also a lot of light," she […]