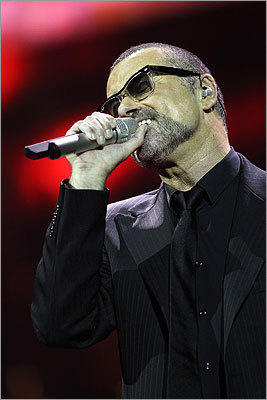 The star, who launched his career with Wham! in the 1980s and later continued his success as a solo performer, is said to have “passed away peacefully at home”. The cause of death was heart failure.
Thames Valley Police said South Central Ambulance Service attended a property in Goring in Oxfordshire at 13:42 GMT.
Police say there were no suspicious circumstances.
Michael, who was born Georgios Kyriacos Panayiotou in north London, sold more than 100m albums throughout a career spanning almost four decades.
He first found fame with his schoolfriend Andrew Ridgeley in duo Wham! before going on to release solo albums, including the multi-million selling Faith and Listen Without Prejudice Vol. 1.
Wham! scored big with hits such as “Wake Me Up Before You Go-Go,” “Edge of Heaven,” “Freedom,” “Everything She Wants,” “I’m Your Man” and “Careless Whisper.” They also recorded the holiday classic, “Last Christmas.”
Michael went on to a successful solo career; his 1987 debut album “Faith” sold more than 10 million copies. His solo hits included “Father Figure,” “One More Try,” “Monkey,” “Different Corner,” “I Want Your Sex” and “Praying for Time.” He also had #1 hit duets with Aretha Franklin (“I Knew You Were Waiting for Me”) and Elton John (“Don’t Let the Sun Go Down on Me”).
Earlier this month it was announced that producer and songwriter Naughty Boy was working with Michael on a new album.
In a statement, the star’s publicist said: “It is with great sadness that we can confirm our beloved son, brother and friend George passed away peacefully at home over the Christmas period.
“The family would ask that their privacy be respected at this difficult and emotional time. There will be no further comment at this stage.”
In 2011, Michael postponed a series of concerts after being taken to hospital for treatment for pneumonia.
After treatment in a Vienna hospital, he made a tearful appearance outside his London home and said it had been “touch and go” whether he lived.
Doctors were said to have performed a tracheotomy to keep his airways open and he was unconscious for some of his spell in hospital.

American pop singer Richard Marx took to Facebook to say he helped subdue an unruly passenger he claimed was attacking others on a Korean Air flight from Hanoi to Seoul on Tuesday morning. Daisy Fuentes, Marx’s wife and herself a celebrity from the 1990s, captured photos as the scene involving her husband unfolded. Marx posted photos on his Facebook page, along with commentary about what he says happened on Korean Air Flight 480. Marx wrote that a “mentally unhinged” passenger […]