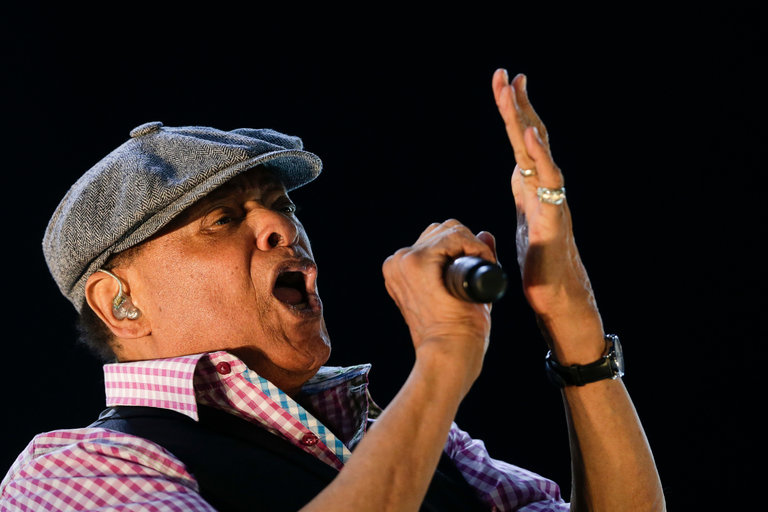 Al Jarreau, a versatile vocalist who sold millions of records and won numerous Grammys for his work in pop and R&B as well as his first love, jazz, died on Sunday in Los Angeles. He was 76. He had been a guest on “The Lost 45s” show numerous times.
His death was announced by his manager, Joe Gordon, who said Mr. Jarreau had been hospitalized for exhaustion two weeks ago.
A preacher’s son, Mr. Jarreau started singing in public as a boy but did not begin a full-time musical career until the late 1960s, when he was nearly 30. Before that, he had worked as a psychologist and rehabilitation counselor.
By the 1970s he had became a widely popular jazz singer, touring extensively and appearing often on television. Critics praised his supple voice, his improvisational skill and, in particular, his virtuosic ability to produce an array of vocalizations, ranging from delicious nonsense to clicks and growls to quasi-instrumental sounds.
Over time, Mr. Jarreau’s work — both his singing and his original compositions — came to incorporate elements of pop, folk, soul, gospel, rhythm and blues and Latin music. The result was a highly accessible, intensely personal and commercially successful style that defied easy genre classification, though some jazz purists derided it as fusion or, worse still, smooth jazz.
Writing in The New York Times in 1981, Stephen Holden reviewed a concert by Mr. Jarreau at the Savoy in New York. The review encapsulated both the pros and the cons of his singular style:
“Al Jarreau may be the most technically gifted singer working in jazz-fusion today,” Mr. Holden wrote. Of the evening’s performance, however, he continued: “Mr. Jarreau’s concert lacked the emotional range of great jazz. He is such a prodigious talent that the absence of even the slightest blues inflections kept his music from cutting deeply.”
Breakin’ Away
Mr. Jarreau released more than 20 albums. He won seven Grammy Awards, and it was a mark of his eclecticism that they spanned three different categories: jazz, pop and R&B.
He won a Grammy in 1978 for best jazz vocal performance, for his album “Look to the Rainbow.” He won his last in 2007, for best traditional R&B vocal performance; the award was shared by Mr. Jarreau, George Benson and Jill Scott for their collaborative performance, “God Bless the Child.”
In between, in 1982, Mr. Jarreau earned a Grammy for best pop vocal performance by a male artist for the title track of his album “Breakin’ Away.” That year, he also received the Grammy for best jazz vocal performance by a male artist, for his version of Dave Brubeck’s “Blue Rondo à la Turk,” from the same album.
Blue Rondo à la Turk
His other Grammys came in 1979 for the album “All Fly Home” (in the jazz category) and in 1993 for the album “Heaven and Earth” (in R&B).
Alwin Lopez Jarreau was born in Milwaukee on March 12 , 1940 . His father, a minister, was a fine singer; his mother played the piano in church. Young Al began singing at 4, harmonizing with his siblings. As a youth he sang in church, as well as with street-corner harmony groups and local jazz bands.
Mr. Jarreau earned a bachelor’s degree in psychology from Ripon College in Wisconsin in 1962, and a master’s in vocational rehabilitation from the University of Iowa in 1964. Afterward he moved to San Francisco, where he worked as a rehabilitation counselor for people with disabilities. But Mr. Jarreau found he could not resist the pull of jazz and before long was singing in small clubs. By the late ’60s he had quit his day job and embarked on a nightclub career, first on the West Coast and eventually in New York.
The album advertised as his debut, “We Got By,” was released by Warner Bros. in 1975 to critical praise. (A decade earlier, Mr. Jarreau had quietly recorded an album, later released on the Bainbridge label under the title “1965.” Though Mr. Jarreau took legal action, without success, to block its belated release in 1982, it is esteemed by jazz connoisseurs today.)
His other albums include “Glow” (1979) and “Accentuate the Positive” (2004). Mr. Jarreau’s first marriage, to Phyllis Hall, ended in divorce.
He is survived by his wife, the former Susan Player; a son, Ryan; two brothers, Marshall and Appie; and a sister, Rose Marie Freeman.
So eclectic was Mr. Jarreau that he even did a turn in a Broadway musical, appearing as a replacement in the role of the Teen Angel in the 1994 revival of “Grease.”

Our pal Sonny Geraci, the Cleveland-born pop singer who scored national hits as lead singer of The Outsiders in the 1960s and Climax in the 1970s, has died. He was 69, and had been in ill health since suffering a brain aneurysm in 2012. Geraci, a graduate of John Adams High School, became lead singer of The Starfires in 1964. The band, founded by guitarist and songwriter Tom King soon changed its name to The Outsiders and put four singles […]