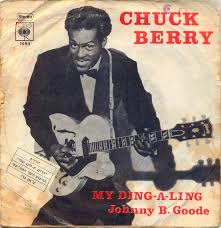 Chuck Berry, one of the creators of rock and roll, has died, according to police. He was 90. St. Charles County, Missouri, police said Saturday they responded to a medical emergency on Buckner Road at approximately 12:40 p.m. Inside the home, first responders found an unresponsive man, but despite immediately administering lifesaving techniques, the 90-year-old man could not be revived. He was pronounced dead at 1:26 p.m., police said.
The St. Charles County Police Department identified him as Charles Edward Anderson Berry Sr., better known as Chuck Berry. A statement on Berry’s Facebook page said he “spent his last days at home surrounded by the love of his family and friends.”
The rock legend had announced in October, on his 90th birthday that he was releasing a new album. The album, titled “Chuck,” was to debut in 2017. It was his first new album in 38 years.
The “Johnny B. Goode” musician recorded the project in his native St. Louis with his longtime backing group, which includes his children Charles Berry Jr. and Ingrid Berry.
In a statement, Berry dedicated the album to his wife of 68 years, Themetta Berry, whom he refers to by her nickname, “Toddy.”
“My darlin’ I’m growing old! I’ve worked on this record for a long time. Now I can hang up my shoes!” he said.
Born Charles Edward Anderson Berry October 18, 1926 in St. Louis, Missouri, Berry popularized rock and roll with 1950s hits including “Rock and Roll Music,” “Johnny B. Goode,” “Roll Over Beethoven” and “Maybellene,” fusing blues, rockabilly and R&B into a sound that helped define the genre, coupled with guitar virtuosity and showmanship that was emulated by countless performers in the decades after.
He directly influenced the early music of The Beatles, The Rolling Stones, The Beach Boys and The Kinks. Not surprisingly, Berry was among the first group of performers inducted into the Rock & Roll Hall of Fame in 1986.
Among his many other accolades, Berry received a Grammy Lifetime Achievement Award in 1984, was recognized at the Kennedy Center Honors in 2000 and was presented with Sweden’s prestigious Polar Music Prize in 2014.
Berry also performed at inauguration events for both of Bill Clinton’s presidencies.
“Hillary and I loved Chuck Berry for as long as we can remember,” the former president said in a statement Saturday night. “The man was inseparable from his music –- both were utterly original and distinctly American. He made our feet move and our hearts more joyful. And along the way he changed our country and the history of popular music. Chuck played at both my inaugurations and at the White House for my 25th Georgetown reunion, and he never slowed down, which is why his legend grew every time he stepped on stage. His life was a treasure and a triumph, and he’ll never be forgotten. Our hearts go out to his family and his countless friends and fans.”
Chuck Berry’s life was a treasure and a triumph, and he’ll never be forgotten. https://t.co/3Q7z0NatUd
— Bill Clinton (@billclinton) March 19, 2017
Berry’s music even made it into outer space — his 1958 hit “Johnny B. Goode” is the only rock and roll song included on the so-called “Golden Record” affixed to the Voyager spacecraft that was launched into the cosmos in 1977.
Speaking with ABC News a few years ago, Berry was asked to name the favorite songs he’s written, but he said he couldn’t choose one.
“Every one of them is tops with me,” he said. “Every one of my children the same way.”

Joni Sledge, a founding member of the R&B vocal group Sister Sledge, was found dead Friday in her home in Phoenix, publicist Biff Warren told CNN on Saturday. She was 60 years old. The Sledge family was shocked by her death as she had not been ill, Warren said. The cause of death was unknown. The group of sisters were best known for the 1979 dance anthem "We Are Family." Other hits were "He's the Greatest Dancer" and "My Guy." […]