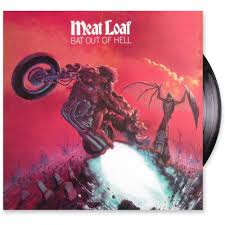 Meat Loaf’s classic ‘Bat Out Of Hell’ is about to be reissued and Meat Loaf and Jim Steinman are furious about it.
Meat Loaf has taken to his social media pages to slag off Sony for not paying him or Jim Steinman royalties on the record for decades. He says that while Sony admits to selling over 44 million copies of ‘Bat Out Of Hell’, he has earned “pennies” from the company.
In a statement Meat Loaf said, “In June, Sony records in the UK, is trying to release another stupid version of “Bat Out Of Hell” only for them to make more money. For those of you who do not know, Jim and I get no royalties from Bat and never have. They admit they have sold 44 million (what have they really sold worldwide). Jim and I have gotten, I am serious, pennies. They have screwed me and Jim since 1981. It took us almost 13 years just to get statements. So I am asking all of you to not buy this record, to boycott this release completely. It is nothing but a greedy record company, trying to steal your money. Don’t buy, thanks, Meat and Jim PS . Spend your money and go see a great musical “Bat Out Of Hell” the musical”.
Sony will have the 40th anniversary edition of Bat Out Of Hell out on June 9, 2017. The new version will include three bonus tracks including an 11 minute live version of ‘Bat Out Of Hell’ and the title track of the follow-up album ‘Dead Ringer For Love’, a duet between Meat Loaf and Cher.
‘Bat Out Of Hell’ is estimated to be the fourth biggest selling album of all-time.

Elton John has been hospitalized with an illness that has forced him to scrap a series of Las Vegas shows. Reports suggested the singer was battling poor health following a recent medical procedure and needed time to rest up, but now it appears the situation is much worse. His entire April and May run of The Million Dollar Piano shows at the Colosseum at Caesars Palace in Sin City has been cancelled, together with a planned May gig in Bakersfield, […]