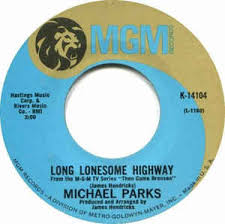 Character actor Michael Parks, 77, who played memorable roles in films by directors such as Quentin Tarantino and Kevin Smith, died Wednesday, May 10, 2017. Smith announced the actor’s death via Instagram.
Parks’ acting career began with small roles on 1960s television series, and from 1969 to 1970, he starred on NBC’s “Then Came Bronson” as Jim Bronson, a wanderer who motorcycles around the country. Parks also sang the show’s theme song, “Long Lonesome Highway,” which became a pop and country hit. The song’s popularity led to a series of MGM albums in the following years.
Though he continued acting through the 1970s, ’80s, and ’90s, notably playing Canadian drug smuggler Jean Renault in five episodes on David Lynch’s cult classic ABC series “Twin Peaks” in 1990, Parks’ career experienced a resurgence around the turn of the century. Coming to the attention of director Quentin Tarantino, Parks played Texas Ranger Earl McGraw in the Tarantino-written “From Dusk Till Dawn” and the same character again in both of Tarantino’s “Kill Bill” movies as well as in the Robert Rodriguez/Quentin Tarantino collaboration “Grindhouse.” He also appeared in Tarantino’s acclaimed 2012 drama, “Django Unchained.” The same year, he also played comic book author Jack Kirby in the best picture Oscar-winning “Argo.”
Parks played multiple roles in several movies, including “Kill Bill Vol. I” and Kevin Smith’s “Tusk.” Smith, who called Parks “hands-down, the most incredible thespian I ever had the pleasure to watch perform,” also directed him in the 2011 thriller “Red State.”
Parks is survived by his wife, Oriana, and son, James.

Paul McCartney returns to the movie theater on Friday, May 26 as a pirate in Pirates of the Caribbean: Dead Men Tell No Tales. McCartney has a small part, listed only as “Jail Guard 2”, so it sounds like it could be a look-quick-or-you’ll-miss-him situation. “Jail Guard 1” is being played by James ‘Jimmy Love’ Lawson whose only other credit is that of a swarm soldier in Star Trek Beyond. McCartney’s acting resume is also a little slim. Outside of […]