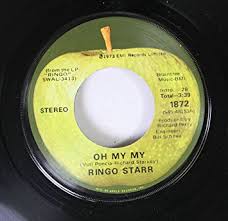 Ringo Starr will turn 77 on July 7 and, for the tenth straight year, he wants to bring people together in the name of “Peace and Love”.
The tradition started in 2008 in Chicago when Ringo gathered fans for a short ceremony. He has since taken it to New York, Hamburg, Nashville and, for the last three years, in Los Angeles at the Capitol Records Tower.
Once again, Ringo is asking fans to come to Capitol in L.A. at noon on July 7 for what is being called “a moment of peace and love”. He has also asked those around the world to post #PeaceandLove in social media at noon the same day.
This year, there will also be sister gatherings around the world that have been organized by fans with the locations list growing all the time. For now, the following cities will see local Peace and Love gatherings:
Africa, Juba, South Sudan
Antarctica, South Pole
Argentina, Buenos Aires
Brazil, Rio de Janiero
Brazil, Sao Paulo
Costa Rica, San José
El Salvador, San Salvador
Haiti, Port Au Prince
India, Bijauri
New Zealand, Masterson
Panama, Panama City
Peru, Lima
Russia, Moscow
UK, London, England
USA, Fairfield, Iowa
USA, Las Vegas, Nevada
More cities and details will be posted on Ringo’s Facebook page in the Events section as it becomes available.
Ringo said “I can’t think of a better way to celebrate my birthday, or a better gift I could ask for, than Peace & Love. How great that this idea keeps growing and spreading. Thanks to everyone supporting it. Peace & Love, Ringo.”

(CNN) Olivia Newton-John is postponing her tour as she battles breast cancer for the second time. The singer, 68, was set to hit the road in June for concerts in the U.S. and Canada, after initially postponing the tour earlier this month. "The back pain that initially caused her to postpone the first half of her concert tour, has turned out to be breast cancer that has metastasized to the sacrum," a statement posted on her official Facebook page read. […]