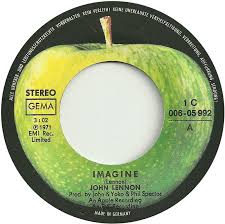 (CNN) “Imagine” Yoko Ono had inspired one of John Lennon’s greatest songs. It’s easy if you try.
The National Music Publishers Association on Wednesday announced that Lennon’s widow is to receive a co-writing credit on the 1971 song as part of the organization’s Centennial Song Award.
During the announcement, a clip of an interview with Lennon from 1980 was played in which he said credit for “Imagine” should be shared with Ono because he took the concept and the lyric from her book “Grapefruit.” Ono and Lennon’s son Sean posted a photo with his mother from the event.
“Proudest day of my life: The National Music Publishers Association just gave the centennial (song of the century) award to Imagine, but WAIT! Surprise! They played an audio interview of my father saying (approximately) ‘Imagine should’ve been credited as a Lennon/Ono song, if it had been anyone other than my wife I would’ve given them credit,'” he wrote in the caption. “Cut to: my mother welling up in tears, and then Patti and Jesse Smith @michiganmanhattan Imagine! Patience is a virtue!”
Ono, 84, was married to Lennon from 1969 until he was shot and killed in 1980.

Lionel Richie had convinced himself he could carry on performing with an injured knee until his team forced him to stop. The singer underwent laparoscopic (keyhole) knee surgery, to treat a torn meniscus, a cartilage, in January and he subsequently postponed his tour with Mariah Carey, which was scheduled to start in March. The 67-year-old has now revealed that throughout his lengthy career he has been programmed to push his problems aside and continue performing, so it was hard for […]