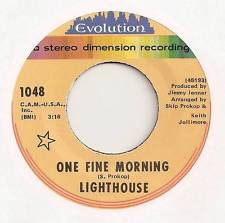 Hear Skip Prokop on “The Lost 45s.”
Skip Prokop, co-founder and drummer with the Canadian rock band Lighthouse, has died. He was 74. He was a frequent guest on “The Lost 45s.”
Band manager Brenda Hoffert, wife of Lighthouse co-founder Paul Hoffert, says Prokop died Wednesday in a St. Thomas, Ont., hospital.
She says Prokop had been living with a heart condition and was ill for some time.
Prokop had been unable to perform with the Juno Award-winning band since 2014 so his son, Jamie, had stepped in to take his place.
Founded in 1968, Lighthouse was distinguished for its fusion of rock and jazz, with infectious tracks like the Top 40 hits “One Fine Morning” and “Sunny Days,” plus the cool “Lost 45” “Pretty Lady.”

'The absolute transformation of everything that we ever thought about music will take place within 10 years, and nothing is going to be able to stop it. Music itself is going to become like running water or electricity” David Bowie June 2002. This week the music of David Bowie reached a major milestone with the one billionth stream on Spotify from his stellar 50-year career. The #1 streamed song, “Heroes”, originally recorded in English, French & German, it has become […]