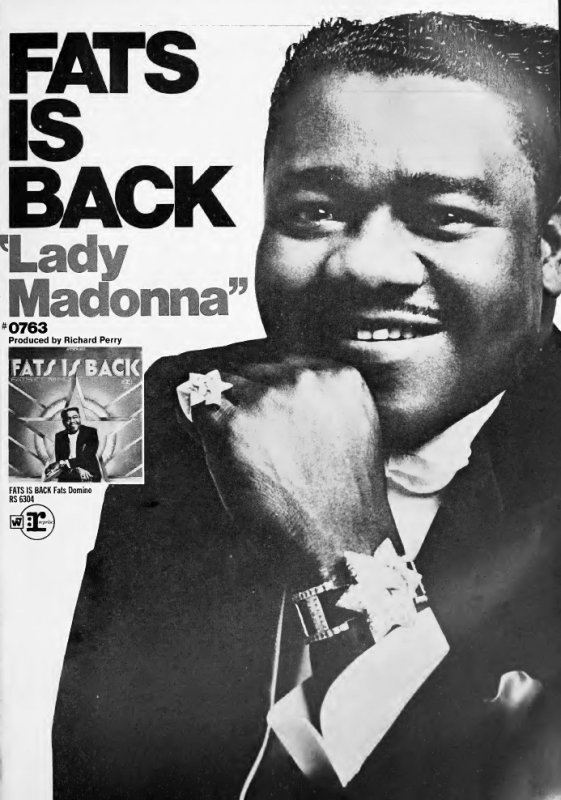 The legendary New Orleans singer and pianist Fats Domino, known for hits like “Blueberry Hill” and “Ain’t It A Shame” has died. He was 89. Domino, whose real name is Antoine Domino Jr., died surrounded by his family.
The iconic artist was born and raised in New Orleans and first broke out into the city’s rock and roll scene in the late 1940’s after joining the band The Solid Senders.
His first record “The Fat Man” garnered him national attention – selling one million copies by 1953 after it was released in 1949.
It was said to be the first rock and roll record to reach that achievement and some music historians even credited it to be the first rock and roll record to exist, according to the Rock and Roll Hall of Fame.
Domino first found himself sectioned to only the R&B charts until his song “Goin’ Home” made it to No. 30 on the main chart and the following year his song “Goin’ To The River” landed at No. 24. In 1955, “Ain’t It A Shame” helped propel Domino’s sound across genres and landing at No. 10 on the pop charts.
A cover of the track, re-titled “Ain’t That a Shame,” was done by Pat Boone and landed even higher on the pop charts at No. 1 for a period of two weeks.
He was inducted into the Rock and Roll Hall of Fame in 1986 and received a Grammy Lifetime Achievement Award in 1987.
The Hall of Fame largely credited him with influencing the likes of Billy Joel, Elton John and Paul McCartney. Fats also inspired “Lady Madonna” by the Beatles, which he himself recorded in 1968.

Rolling Stone put him on the list of “Greatest Recording Artists of All Time” at No. 25.
Actor Wendell Pierce paid tribute to his hero, Fats Domino, upon hearing the news of his death.
“Words fail me in this moment of deep heartache and sadness,” Pierce wrote. “We have lost a legend. One of my heroes. New Orleans’ Fats Domino is dead.”

Kenny Rogers insists he's all ready for retirement after ticking a Music City Walk of Fame induction off his bucket list. The veteran country star will end his career with a massive, star-studded farewell concert in Nashville, Tennessee on Wednesday night and on Tuesday he was in the city to receive a major honor. Surrounded by family, friends and hundreds of fans, The Gambler singer took his place alongside pals like Dolly Parton and legends Elvis Presley and Johnny Cash […]