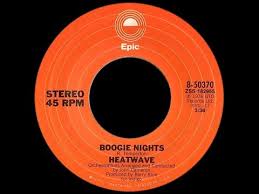 (Rolling Stone) Keith Wilder, the singer of the influential Seventies funk outfit Heatwave, died Sunday at the age of 65. Les Spaine, the group’s manager, confirmed the singer’s death to Rolling Stone. Wilder’s cousin and bandmate, Billy Jones, told Dayton.com that Wilder was suffering from health problems and died in his sleep. No specific cause of death has been revealed.
“He had an excellent compositional instinct and wrote great music because he had absorbed it,” famed producer says of his “go-to” songwriter
Heatwave was responsible for numerous disco and funk classics, charting Top 10 hits with “Boogie Nights” and “The Groove Line,” while their cherished 1977 ballad “Always and Forever” also went platinum. Wilder shared vocal duties with his brother, Johnnie Wilder Jr., with the latter’s silky falsetto the perfect complement to the gritty edge of Keith’s straightforward vocals.
“I am at a loss for words,” Jones said. “We are going to miss his voice. He had a great voice, but we can always put on a record and hear it.”
In a tribute on Instagram, Roots drummer Questlove wrote, “Keith sang on ALOT of my fav Heatwave joints (‘Boogie Nights,’ ‘Groove Line,’ ‘One Night Tan,’ & the dramatic epic ‘Therm Warfare’) he was the gruff voiced counterpart to his younger brother’s velvet smoothness. Edwards to Kendricks, Jermaine to Michael, Gorrie to Stuart, White to Bailey, Levert to Williams practically EVERY monster soul group gave you more than one vocalist to focus on.”
“He was a man of standards, class act, great entertainer, and had a great sense of humor,” Keith Harrison, who played in Heatwave with Wilder and had known him since high school, tells Rolling Stone. “He will greatly be missed!”
Born in Dayton, Ohio, Wilder was playing in a local band before his brother Johnnie enlisted him in his fledgling outfit overseas. While serving in the Army in West Germany, Johnnie Wilder Jr. had also sung in nightclubs, and following his discharge, moved to the United Kingdom where he linked up with keyboardist and songwriter Rod Temperton. The group, then known as Chicago’s Heatwave, played around London before Wilder called on his brother. The rest of the band was fleshed out with musicians from all over the world, including Czech drummer Ernest “Bilbo” Berger, Swiss bassist Mario Mantese, Jamaican guitarist Eric Johns and British guitarist Roy Carter.
In 1976, Heatwave released their debut album, Too Hot to Handle, which peaked at Number 11 on the Billboard album charts. Along with its hits – “Boogie Nights” and “Always and Forever” – the record boasted beloved deep cuts like “Ain’t No Half Steppin'” and “Sho’nuff Must Be Luv.”
Heatwave’s 1978 follow-up, Central Heating, proved equally successful, but a pair of tragedies struck around the release of their third LP, Hot Property. In 1978, Mantese was left permanently disabled after a stabbing before a car accident left Johnnie Wilder Jr. paralyzed from the neck down several months later.
Nevertheless, Heatwave’s core – the Wilder siblings and Temperton – reunited for two more studio albums, Candles and Current, released in 1981 and 1982, respectively. The band continued to tour, with future Commodores vocalist J.D. Nicholas taking over for Wilder Jr. on the road. However, Heatwave’s popularity was fading, and Temperton was carving out a new path for himself as a go-to songwriter, penning hits for Michael Jackson, Michael McDonald, George Benson and more.
In 1988, Keith Wilder released a new Heatwave album, The Fire, though he and Jones were the only musicians from the group’s classic era to play on it. After years of limited success, Heatwave began to reemerge in the pop consciousness thanks to sampling and remixes. During the Nineties, Wilder even reformed the band as a live act and toured regularly, releasing a live album in 1997.
Johnnie Wilder Jr. died in 2006, and Temperton in 2016, but Keith Wilder continued to tour. However, he was forced off the road temporarily after suffering a stroke, as he told the Dayton-based Funk Music Hall of Fame in a 2015 interview.
Reflecting on his career, Wilder said, “From Heatwave is your heart. If your music is where your heart is, and you put your whole heart into, it will come out the way your heart is as a person and a human being. Johnnie and myself, we kept our music in a vein that also was a pure, clear picture and representation of what we were like, and what we were about. And we kept our music that way… We just kept it real and kept it pure.”

George Young, songwriter-guitarist for the Easybeats, Flash & the Pan and producer for AC/DC, died October 22, 2017, at the age of 70, according to multiple news sources. He was the older brother of Malcolm and Agnus Young of AC/DC. They paid tribute to their brother on their Facebook account: "It is with pain in our heart that we have to announce the passing of our beloved brother and mentor George Young. Without his help and guidance there would not […]