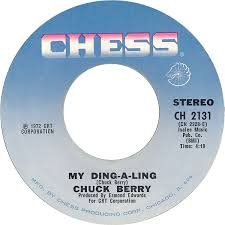 Chuck Berry’s widow has signed a deal to bring the rock pioneer’s life story to the screen in a documentary and biopic.
Themetta Berry, who lost her husband of 68 years at the age of 90 in March last year (17) has signed a deal with executives at U.K. film company Cardinal Releasing to produce the movies, according to Deadline.com.
Jon Brewer, who has previously documented the lives of music legends including Nat King Cole, B.B. King and Jimi Hendrix, is to produce and direct the factual film, tentatively titled Chuck! The Documentary.
“I am very privileged to be able to produce and direct this fully authorized and official story of the legendary Chuck Berry,” the filmmaker said in a statement.
Principal photography has already begun on the documentary, with production on the biopic to follow after its completion.
As an early rock ‘n’ roll pioneer, Chuck is one of the most influential figures in the music industry, having created hits including Johnny B. Goode, Roll Over Beethoven and Maybellene.
Famed for his ‘duck-walk’ stage moves and guitar solos, Chuck was the subject of several documentaries in his lifetime, including Chuck Berry Hail! Hail! Rock ‘n’ Roll, which covered a star-studded concert celebrating his 60th birthday.
Chuck’s life was not without controversy, however, as he spent time in prison for tax evasion and was jailed at the height of his career after he was arrested for transporting a 14-year-old girl across U.S. state lines for “immoral purposes”. In 1994, he paid $830,000 to settle a class-action suit filed by dozens of women who claimed they had been taped using the bathroom in a restaurant he owned in Missouri.
The rocker has been played on screen before, notably by the rapper Mos Def in the 2008 movie Cadillac Records, which chronicled the life of Chicago, Illinois record executive Leonard Chess.

Neil Diamond has announced his retirement from touring after revealing he has been diagnosed with Parkinson's disease. The Sweet Caroline singer made the announcement on Monday, two days before his 77th birthday, after cancelling the latest leg of his 50th anniversary tour, which was set to begin in New Zealand in March, on doctor's orders. A statement from the music icon on his website reads: "It is with great reluctance and disappointment that I announce my retirement from concert touring. […]