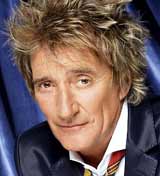 Rod Stewart has insisted that he always behaved like a gentleman with women in the ’60s and ’70s.
The rocker was a hit with the opposite sex when he first became famous with The Jeff Beck Group and Faces in the 60s, and he and bandmate Ronnie Wood always had women throwing themselves at them, but Rod insists he always treated them with respect.
However, speaking at the BFI Southbank in London after a screening of film Rod The Mod, he acknowledged that he wouldn’t have been able to get away with some of his behavior if he was trying to hit the big time now.
“Ronnie (Wood) and I were talking about this at our anniversary party last year and were saying how women literally used to throw themselves at us. It really was, ‘Oh, not again tonight, Ronnie,'” he recalled. “I can only speak from my perspective but as a rock ‘n’ roll singer, I used to show off with the girls. I would never touch a girl unless she wanted me to.
“Things have changed. You could get away with a bit more in those days than you can now and things have changed for the better.”
The 73-year-old also insisted that he would never dream of swearing at a woman, and only does so when he’s having an argument with his wife Penny Lancaster.
Penny, who he married in 2007, is his third wife, and he reckons he’s better at marriages now that he’s older and understands women better.
“I have been married three times and I say this with all honesty, I have got a great woman now,” he gushed. “But I have got a diamond by my side now. She really is and I can’t say any more than that.”
The rocker had plasters on his right hand during the talk, and he revealed it was because he had recently undergone surgery to remove sun spots.
“I have just had a little operation on my hand. I had a couple of sun things there and they burnt them off,” he said.

Yvonne Staples, whose voice and business acumen powered the success of the Staple Singers, her family’s hit-making gospel group that topped the charts in the early 1970s with the song “I’ll Take You There,” died April 10 at her home in Chicago. She was 80. The Chicago funeral home Leak and Sons confirmed the death. The cause was colon cancer. Ms. Staples performed with her sisters Mavis and Cleotha and their father, Roebuck “Pops” Staples, on hits such as “Respect […]