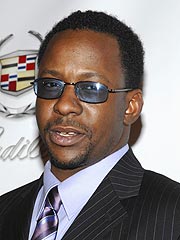 (Music-News.com) Bobby Brown found a little peace while promoting his new TV movie “The Bobby Brown Story” in the hotel where Whitney Houston died.
The singer showed up at the Beverly Hilton in Beverly Hills, California for a Television Critics Association panel on Friday and was quickly reminded his ex-wife accidentally drowned in a bathtub in her suite there back in 2012.
But, rather than take issue with the location for the press day, Bobby told reporters he felt good to be close to Whitney’s spirit.
“This is the place they chose (for this) and the spirit of my ex wife is probably still here,” he told WENN. “In that light, it feels good to be here and to promote this movie. To be able to smile and be here with my wife and my kids… Being here is just another notch.”
And he was upbeat about the new BET movie about his life, his career and his marriage to Houston, insisting the film will right wrongs and clean up a few misconceptions about his bad boy past.
“The stories that have been told about me are false, so we’re just correcting everything the press has believed about me and I’m able to tell my story from what I know, my truth,” he added. “I think the press has basically gotten the wrong impression of me and the wrong impression of our relationship.
“What me and Whitney went through is what we went through. There were no violent instances between me and Whitney and no 911 calls.”
But Whitney did call the police after one row with Bobby, with reports suggesting she had a one-inch bruise on her cheek and a cut upper lip when officers responded.
“The public record is wrong,” Brown said when he was reminded of one very public altercation between himself and his former wife.
Meanwhile, Woody McClain, who plays Brown in the movie, insists the project will revamp Bobby’s image.
“Before I started all this I knew very little about Bobby Brown,” he explained. “I just heard the name but I never really seen the performances until I YouTubed it. I’m really good at picking up people’s mannerisms. I watched all the clips and dance rehearsals 24/7 until it was just a part of me. I went into Bobby Brown and his personality is so big which is so opposite from who I am so it was a great role for me to do.
“I had Bobby on set to guide me and tell me about his life. Being able to talk to him and his family changed my perception of who Bobby Brown is and I really wanted to humanize him.”

Sir Elton John tried to help pal George Michael with his drug issues but the late singer didn't want to be saved. Michael died on Christmas Day, 2016 after battling addiction for years, with experts insisting years of heavy drug abuse took a fatal toll on his body. And now Elton, who has also struggled with addiction issues, has revealed he tried to help George give up drugs, telling Britain's Channel 4 News: "I tried to put my arms around […]