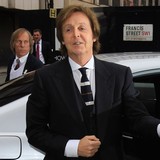 Paul McCartney’s recent “Carpool Karaoke” segment on funnyman James Corden’s U.S. late-night show is to be expanded for a TV special.
The skit, which was shot in the Beatles star’s native Liverpool and appeared on “The Late Late Show” in June, has been expanded into an hour-long episode, titled “Carpool Karaoke: When Corden Met McCartney Live From Liverpool” and it is set to air in the U.S. on August 20th.
The show will feature unseen footage from McCartney’s appearance in the skit, which was shot while Corden’s show was taped at Central Hall Westminster in London.
During the filming, Corden and McCartney paid a visit to the former Beatles star’s childhood home, as well as notable places mentioned in the band’s hit “Penny Lane.” The rocker also thrilled locals by staging an intimate gig in a city pub.
“We were overwhelmed by the response to our Carpool Karaoke with Paul McCartney. We loved making it and knew we had something special, but it was so wonderful for us to see how many people watched and enjoyed it,” said Ben Winston, executive producer of The Late Late Show in a press release. “I think it resonated with people as Paul’s music speaks to every generation, young and old, especially today.
“The message in the music is as relevant now as it has ever been. After the shoot, while we sat in the edit, we had to cut so much we loved for time. Not only did Paul do a concert in that Liverpool pub, but James and he discussed so much in the car. We are so delighted CBS has given us this prime time special to make an hour-long version of this “Carpool Karaoke.” Now everyone can see the joy of that concert and more of their chat.”
The Paul McCartney Carpool Karaoke footage has been viewed almost 130 million times on Facebook and YouTube, and it is currently the most watched video on Facebook Watch.

Dionne Warwick has slammed allegations her late sister Dee Dee Warwick molested Whitney Houston when she was young. In new documentary Whitney, the tragic singer's longtime assistant claimed Whitney told her that her cousin, Dee Dee, molested her as a child, and Whitney's oldest brother Gary also alleged he was one of her victims. After the accusations arose in the film, which premiered at the Cannes Film Festival in May, Whitney's mum Cissy Houston released a statement to People magazine […]