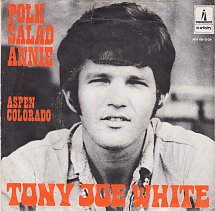 Hear Tony Joe White say hello on “The Lost 45s.”
“Polk Salad Annie” and “Rainy Night in Georgia” songwriter Tony Joe White died suddenly late Wednesday afternoon at his home in Leiper’s Fork, according to his family.
“He wasn’t ill at all,” said his son, Jody White. “He just had a heart attack…there was no pain or suffering.”
White was 75 years old, and known for his signature “swamp rock” sound, a potent blend of elements of blues, rock, country and R&B. Over the last half-century, his songs have been recorded by a pantheon of greats, including Elvis Presley, Dusty Springfield, Brook Benton, Ray Charles, Tina Turner (“Steamy Windows”) and many more.
It was White’s 1972 record “The Train I’m On,” produced by Jerry Wexler and Tom Dowd, that first captivated Miller: “The songwriting, his singing, everything came together. It was just like the perfect storm of soul in every way…and we need all the soul we can get these days.”
Tony Joe White was born July 23, 1943 near Oak Grove, Louisiana. He was the youngest of seven children, and grew up on a cotton farm.
Both of his parents and all of his siblings played music, White told The Tennessean last summer, but he wasn’t inspired to pick up an instrument until his early teens, when he first heard bluesman Lightnin’ Hopkins.
“Up to then, I never played nothing. I just sit and listened.” he’d said. “But man, I started sneaking my dad’s guitar up to my room at night and learning the blues.”
He was first inspired to write his own songs after hearing Bobbie Gentry’s 1967 chart-topper “Ode to Billie Joe.” Drawing on his own life experiences, White penned enduring classics like “Willie and Laura Mae Jones,” which Springfield recorded, and “Rainy Night in Georgia,” which has been recorded by Brook Benton and more than 100 other artists, all before he turned 30.
In the late 1960s, White signed with Monument Records. His debut album, “Black and White,” was recorded in Nashville and released in 1969.
Last month, White released blues album “Bad Mouthin’,” which he recorded on his Leiper’s Fork property in a no-frills recording studio that used to be a two-stall horse barn. The record included covers of songs recorded by Hopkins, John Lee Hooker and Big Joe Williams, among others, as well as a couple originals he wrote before “Polk Salad Annie.”
The album came out on Sept. 28. That night, he made his Grand Ole Opry debut.
Shortly before his death, White recorded several new songs that will hopefully be released in the future, said Jody White.
White is survived by his wife, Leann, children Michelle, Jim Bob and Jody, and several grandchildren. Funeral arrangements have not yet been finalized.

Cher has expressed her outrage at the report that U.S. President Donald Trump's administration is considering implementing a policy which would eliminate the recognition of transgender individuals. The singer, whose son Chaz Bono is transgender, took to Twitter to vent her frustration after the New York Times published a government memo which stated that the policy would require an individual to "be defined as male or female based on their genitalia at birth". "The Department of Health and Human Services […]