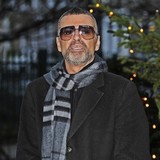 “Bridesmaids” director Paul Feig’s new holiday movie will feature unreleased tracks recorded by George Michael.
Romantic comedy “Last Christmas” is inspired by the late singer’s 1984 Wham! song and now insiders have revealed the movie’s soundtrack will include lost George Michael tunes.
Last week, it was revealed the film, starring Emilia Clarke and Crazy Rich Asians’ Henry Golding, will be released in November 2019, and Feig will direct a script written by Emma Thompson.
According to an official synopsis obtained by Variety, Last Christmas will follow Clarke’s character Kate “who harrumphs around London, making a bundle of bad decisions which includes her job as an elf in a year-round Christmas shop” and Tom (Golding), who walks into her life and “starts to see through so many of Kate’s barriers”.
George Michael was reportedly helping to develop the movie’s script before he died on Christmas Day, 2016 at his home in Goring-on-Thames in Oxfordshire. He was 53.
Reports suggest the film will be full of George’s songs, including some he recorded but never released.

Boy George's personal challenge to write about traveling around America has resulted in new Culture Club album "Life." The record marks the band's first collection of new music in 19 years, though the group have continued to tour on a regular basis. Talking to Entertainment Weekly about the album, George divulged what was going through his head when he wrote "Runaway Train," a song which references former U.S. First Lady Michelle Obama. "I wrote the lyrics during the Obama administration. […]