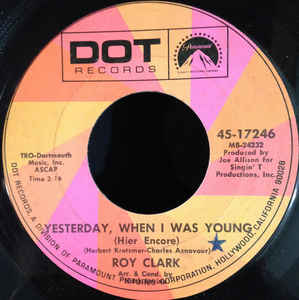 Roy Clark, a country music star and former host of the long-running TV series “Hee Haw,” died Thursday, his publicist told CNN. He was 85.
Clark died of complications from pneumonia at his home in Tulsa, Oklahoma, according to publicist Sandy Brokaw.
The guitarist and banjo player began his musical career as a young teen, making his first appearance at the Grand Ole Opry at age 17.
Clark was the host or co-host of “Hee Haw” from 1969 to 1992. He scored a Top 40 hit with “Yesterday When I was Young.”
CBS launched Hee Haw in summer 1969 as country music’s answer to Rowan and Martin’s Laugh-In. Weaving performances by the genre’s top stars with surprise cameos and down-home comedy skits loaded with catchphrases, it lasted three seasons on the network — finishing in the primetime ratings top 20 in each of its first two — before moving to first-run syndication in 1971 — where it aired for 22 more years.
Among the many series regulars over the years were Louis “Grandpa” Jones, Minnie Pearl — she of the $1.98 pricetag hanging from her flowered hat — Barbi Benton, Roy Acuff, Harry Cole and that animated donkey who punctuated the punchlines with the shows titular laugh. Clark’s longtime co-host Owens died in 2006.
As a musician, Clark personified “pickin’ ‘n’ grinnin’,” having started playing banjo and mandolin before he picked up a guitar. He had 50 singles hit Billboard’s Hot Country Songs chart from 1963-84, including nine top 10s and the No. 1 hit “Come Live with Me” in 1973. He also scored nine top 10 albums on the country album chart. His biggest pop single was “Yesterday, When I Was Young,” which peaked at No. 19 in 1969.
A frequent guest on The Tonight Show starring Johnny Carson, Clark’s warm, welcoming smile and gentlemanly demeanor were among his biggest selling points. “Your face is like a fireplace,” Bob Hope once told him.
“A TV camera goes right through your soul,” Clark once said. “If you’re a bad person, people pick that up. I’m a firm believer in smiles. I used to believe that everything had to be a belly laugh. But I’ve come to realize that a real sincere smile is mighty powerful.”
But he knew and respected the power of TV: “Television really has been responsible for everything that I’ve done successfully,” he told the TV Academy in a 2005 interview (watch a video clip below). “I can’t put it into anything else. No massive hit records. No 30,000 concert attendance, except a couple of times. But you put this face on television, week in, week out, they’d stop me and they’d say, ‘Hey, Roy, how are you doing?’ They’d know who I was, what I was, what I looked like, and what I did — all from seeing and hearing it at the same time on television.”
Roy Linwood Clark was born on April 15, 1933 in Meherrin, VA, but his family moved to Washington, D.C. when he was a kid. His father played in a square dance band and took him to free concerts by the National Symphony and by military bands. “I was subjected to different kinds of music before I ever played,” Clark said. “Dad said, ‘Never turn your ear off to music until your heart hears it — because then you might hear something you like.’”
Clark is survived by Barbara, his wife of 61 years; his sister, Susan Coryell; his sons Roy Clark II and wife Karen, Dr. Michael Meyer and wife Robin, Terry Lee Meyer, Susan Mosier and Diane Stewart, and four grandchildren.

Aerosmith star Joe Perry was hospitalized after performing with Billy Joel at Madison Square Garden in New York on Saturday night. The guitarist left the venue on a stretcher, according to multiple reports, after collapsing in his dressing room backstage. Paramedics, who spent over 30 minutes with the 68 year old, had to put a trachea down his throat to clear the air path before transporting him to a nearby hospital. The rocker's publicist, Marcee Rondan, released a statement on […]