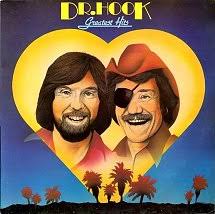 Hear Ray on "The Lost 45s"
Ray Sawyer, the Dr. Hook & The Medicine Show member who sang the 1973 Shel Silverstein-penned hit “The Cover of ‘Rolling Stone,'” has died at the age of 81. They were recently the subject of a career special on "The Lost 45s."
Page Six first reported Friday that Sawyer died in Daytona Beach, Florida following a brief illness; a representative for the band confirmed the singer’s death to Rolling Stone.
The Alabama-born Sawyer – who founded the group with Dennis Locorriere, Billy Francis and George Cummings – was a member of Dr. Hook & The Medicine Show from 1969 to 1981. A few years before the band’s formation, Sawyer lost his right eye in a car accident; Sawyer wore an eyepatch that made him resemble the Peter Pan villain Captain Hook, which served as the inspiration for the Dr. Hook moniker.
In 1970, Dr. Hook & The Medicine Show’s demo tapes wound up in the hands of author and songwriter Shel Silverstein, who recruited the band to become a vessel for his music: The group would turn Silverstein-written tracks like “Sylvia’s Mother” and “The Cover of ‘Rolling Stone'” into hits and released two albums of Silverstein-penned songs, 1971’s Dr. Hook and 1972’s Sloppy Seconds.
The latter single, a tongue-in-cheek paean to the magazine and rock stardom with Sawyer on vocals, became a Top 10 single on the Billboard Hot 100 and resulted in Dr. Hook & The Medicine Show, in caricature form, receiving a Rolling Stone cover in March 1973 as well as a profile of the New Jersey-via-Alabama act. “From unknown bar band to the cover of ‘Rolling Stone,’” the profile noted of the band’s sudden ascension.
Following their Silverstein partnership, the band shortened their name to Dr. Hook and enjoyed a string of hit singles in the mid- to late-Seventies, including “Only Sixteen,” “A Little Bit More,” “Sexy Eyes” and “When You’re in Love With a Beautiful Woman,” which became a Number One hit in the United Kingdom. Bruce Springsteen also notably served as Dr. Hook’s opening act in 1973.
After nine albums with Dr. Hook, Sawyer left in 1983 to pursue a solo career; he previously released a self-titled solo LP in 1977. While Locorriere maintained ownership of the official Dr. Hook moniker, Sawyer toured as Dr. Hook featuring Ray Sawyer over the past few decades. However, health issues forced Sawyer to stop performing live in 2015.
Locorriere said in a statement to Rolling Stone, “Although I hadn’t been in contact with Ray for many, many years it does not erase the fact that we were once close friends and shared an important time in both our lives. Deep condolences go out to his family at what must be a difficult time.”

"Bohemian Rhapsody" has set a new box office record as the highest-grossing music biopic in global history after rocking past the $600 million mark. The film chronicles the rise of iconic British band Queen and stars Rami Malek as late front man Freddie Mercury, and although the project opened to mixed reviews in late October, fans have continued to flock to check out the movie. By the end of Wednesday, ticket sales in North America had totaled $175.7 million, helping […]