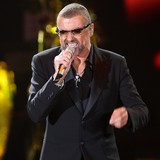 Late singer George Michael’s extensive art collection is set to hit the auction block.
The pop star, who passed away suddenly on Christmas Day, 2016, left behind an abundance of artwork, which will be sold off via the London branch of auction house Christie’s.
Cristian Albu is overseeing the sale of Michael’s collection, which consists of over 160 pieces, and the auctioneer notes the Freedom hit maker became an avid and serious collector from 2004 onwards.
“It stretched all the way to 2009 – that was the most intense period,” he tells BBC News. “I think his finesse as an artist in music made it very easy for George Michael to make the journey into visual art.”
George was first introduced to the art world by British artist Tracey Emin, who later became one of the singer’s good friends.
“She was doing a commission for a particular collector and George happened to be staying with the collector,” Cristian explains. “So George knocked at the door where he knew Tracey was working and asked to be allowed in. But Tracey said she was far too busy and George said, ‘Well fine, but I’m George Michael’ – and Tracey said, ‘I don’t care who you are, just go away’.
“So the relationship had a tricky start, but eventually they were close and it was Tracey who introduced George to the work of the YBAs (Young British Artists), who mainly had studied at Goldsmiths College in London under Michael Craig-Martin. So without an Emin influence, probably there wouldn’t have been this exhibition and this auction now (sic).”
The George Michael Collection will be auctioned off on March 14th, with 60 pieces up for bidding at the evening event. Over 100 more works are already on sale online.

(CNN) Golden Globe-winning actress Katherine Helmond, a frequent scene-stealer on shows such as "Who's the Boss?" and "Soap," has died, her talent agency APA told CNN Friday. She was 89. "She was the love of my life. We spent 57 beautiful, wonderful, loving years together, which I will treasure forever," her husband, David Christian, said in a statement. "I've been with Katherine since I was 19 years old. The night she died, I saw that the moon was exactly half-full, […]