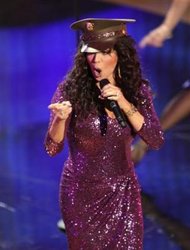 Marie Osmond doesn’t think she’ll ‘ever’ get through the pain of her son’s death. The 59-year-old singer tragically lost her son Michael – whom she had with second husband Brian Blosil – almost 10 years ago in February 2010, when he jumped from the eighth-floor balcony of his downtown Los Angeles apartment at the age of 18.
And she has now said she’s still reminded of what her son “left behind”, as although she has moments in which she feels healed from Michael’s death, they are fleeting.
She told ‘CBS Sunday Morning’: “You know, I don’t think you’re ever through it. I think God gives you respites, and then all of a sudden it’ll hit you like the day it did. The ripple effect is so huge, what you leave behind.”
The ‘Donny & Marie’ star – who is also mother to Stephen, 36, Jessica, 31, Rachael, 30, Brandon, 22, Brianna, 21, Matthew, 20, and Abigail, 17 – previously spoke about her son’s death in November 2010, when she revealed he had been suffering from depression.
She said at the time: “When I heard him say to me, I have no friends, it brought back when I went through depression, because you really feel so alone. I’m not a depressed person, but I understand that place, that darkness … I told him, I said, ‘Mike, I’m gonna be there Monday and it’s gonna be OK.’ But depression doesn’t wait ’til Monday.
“What if I had just put him on a plane and said, ‘Come be with me,’ or gone there? I think if you live in ‘what ifs’ … you stop living.”
At the time of Michael’s death, Marie said she was “devastated” by the tragic news.
In a statement, the ‘Paper Roses’ singer said: “My family and I are devastated and in deep shock by the tragic loss of our dear Michael and ask that everyone respect our privacy during this difficult time.”
Source: music-news.com

Source: music-news.com Ronnie Wood is releasing an album dedicated to Chuck Berry. The Rolling Stones were majorly influenced by the late rock legend and their 1963 debut single was even a cover version of his hit 'Come On'. Ronnie might not have joined the band as bassist until 1975, but he has long been a fan of Chuck. Now he's recorded some of his best songs and even a tribute to the 'Roll Over Beethoven' hit maker for his first […]