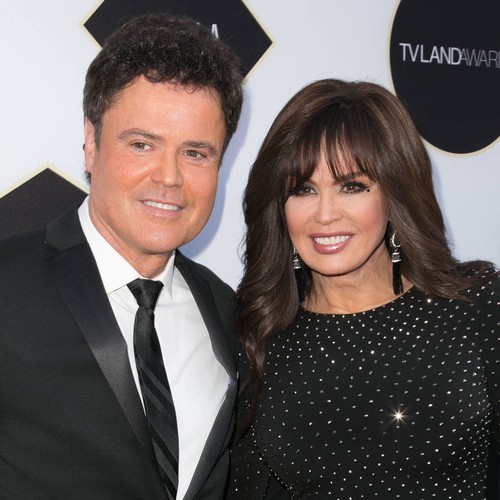 Back in 2008, Donny and Marie Osmond inked a six-week contract with the Flamingo Las Vegas to play at their theater. The show did so well that it got extended… and then extended… and then extended.
Eleven years later, their massively successful residency show has finally ended.
On Saturday, the brother-sister duo performed their Vegas residency show for the last time, ending a truly magical run in a city that has become a hodgepodge of top-line musical acts.
Although the finality of the Donny & Marie show hung over the theater like a thick blanket on Saturday night, the Osmonds proved to be professionals, as they fought through the emotions to perform their top hits.
“I don’t know how I’m going to get through this,” Donny tearfully said before he and Marie closed the show with “May Tomorrow Be A Perfect Day.” Donny was so overcome with emotion, in fact, that he attempted to sing the song but had to stop. After giving Donny a moment, the band started from the top.
Marie, too, fought back tears several times while reflecting on their 11 years on the Flamingo stage.
“I’m gonna miss you guys the most,” she told her backing band while choking up. She later told her brother, “He can say all he wants about the crew and everything else, but I’m going to miss you. I love you.”
“I’m going to miss you, too,” he replied. She quickly joked, “I’ll see you at Christmas.”
The curtain fittingly closed with the siblings hugging in the center of the stage.
Considering their ages — he’s 62 next month and she’s 60 — as well as their other projects, there is speculation that Saturday marked the final time the original Osmond siblings will ever appear in a ticketed show together. As has often been the case when longtime Vegas headliners hang it up, ticket prices for the show reached unprecedented levels, as resellers were asking three to four times the ticket cost the day of the last show.
Marie previously said she had to purchase tickets over a month in advance so she’d be able to give tickets to close friends and members of The Talk production team, a show she joined in September (Her co-hosts Eve and Carrie Ann Inaba were both on hand Saturday night).
According to the Las Vegas Review-Journal, Marie will continue to have a presence on the famed Las Vegas Strip, as she’s expected to create a new show, possibly with a new partner.
Source: People Magazine

Sir Elton John refuses to play 'Candle in the Wind' in front of Prince William and Prince Harry Source: music-news.com The 72-year-old star and his songwriting partner Bernie Taupin updated the 1973 tribute song to Marilyn Monroe in 1997 after Princess Diana's death but Elton admitted that the only time her sons have ever heard him play it live was at the late royal's funeral. He told Billboard: "I would have preferred not to have made the record and for […]