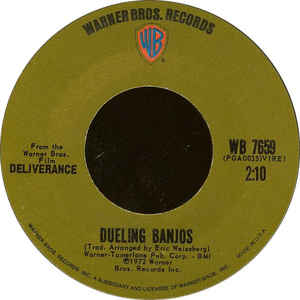 From Rolling Stone.com:
Bluegrass musician Eric Weissberg, whose cover of the Arthur “Guitar Boogie” Smith instrumental “Dueling Banjos” became an unlikely pop hit when it appeared on the soundtrack to the 1972 film Deliverance died Sunday at the age of 80 after a five-year struggle with dementia. His son, Will Weissberg, confirmed the musician’s death to Rolling Stone.
“Eric Weissberg was a consummate musician, a solid and seemingly effortless player of stringed instruments of all kinds — banjo, guitar, mandolin, fiddle, pedal steel, and string bass,” his lifelong friend and frequent collaborator Happy Traum wrote on Facebook: “Despite his prodigious talents and musical successes, he was humble, down-to-earth, and an easygoing companion with not a bit of artifice in him. He had many wonderful stories from his long career that he told in minute detail and with a twinkle of good humor that could keep you entertained for hours.”
Weissberg became infatuated with the banjo at a young age after watching a Pete Seeger performance at his Greenwich Village school as a child. When he was eight, Seeger himself began giving him lessons. He also attended hootenannies at Seeger’s apartment, where he was able to see legends like Woody Guthrie and Leadbelly perform up close.
He enrolled at New York’s Juilliard School of Music in the late 1950s and began gigging with folk acts the Greenbriar Boys and the Tarriers. As a member of the Tarriers, he backed Judy Collins on a European tour and later performed on her 1965 LP, Fifth Album.
But his life changed forever in 1972 when Warner Bros. music producer Joe Boyd asked if he’d record a cover of the 1954 Arthur “Guitar Boogie” Smith instrumental “Dueling Banjos” for the movie Deliverance. The song is played early in the film, when a group of four businessmen (Jon Voight, Burt Reynolds, Ned Beatty, and Ronny Cox) visit a gas station during a canoe trip in a remote part of Georgia and encounter a mentally challenged banjo player who performs the song as an impromptu duet with Cox’s character. It’s an unsettling scene that serves as a harbinger for many of the horrific events that come later in the film.
“I always hated ‘Dueling Banjos’ because I had the original version, ‘Feudin’ Banjos,’ with Arthur Smith and Don Reno,” Weissberg told Banjo Newsletter in 2006. “I hated it because it wasn’t bluegrass at all. It had a rhythm section, with drums. Who needs that?”
Weissberg recorded the song in a more traditional bluegrass style as a duet with guitarist Steve Mandell, and was astonished to see it to become a worldwide hit, reaching Number Two on Billboard’s Hot 100 in early 1973. But Smith wasn’t credited on the soundtrack and he successfully sued Warner Bros. to receive proper credit.
Weissberg began touring and recording with a group he called Deliverance, and in 1974, they were asked to record with Bob Dylan during the New York Blood on the Tracks sessions. Dylan would ultimately re-record much of the album in Minneapolis with a different set of musicians, but Weissberg’s guitar part can be heard on “Meet Me in the Morning.” Much more of his work with Dylan appeared on the 2018 box set, The Bootleg Series Vol. 14: More Blood, More Tracks.
Over the years, Weissberg also worked with Billy Joel, Talking Heads, Jim Croce, and Richard Thompson. He moved to Woodstock, New York, in his later years and continued to tour and perform until health problems sidelined his career.
According to his son, Weissberg was an avid sports fan and ardent automobile and motorcycle collector who purchased and maintained numerous historically significant vehicles, including serial #BC1A (the first built) 1952 Bentley R-Type Continental and a 1955 Vincent Black Shadow.

Source: music-news.com Art Garfunkel has always worried that his voice is too 'feminine' The 78-year-old singer may have entered his sixth decade in the music business but he has always been concerned that his vocals are "too damn sensitive" and not particularly "manly". He said: "I worry that it's too damn sensitive. It's too fragile. "What's a man doing being so ... feminine, so perfect, gilding the lily on all those notes. Is that manly?" The former Simon & Garfunkel […]