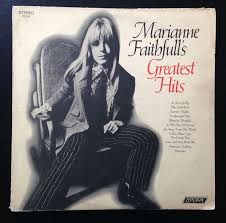 Marianne Faithfull is recovering at home after spending three weeks in hospital battling the coronavirus.
The 73-year-old singer was admitted to a London hospital with coronavirus symptoms, and she subsequently tested positive for the virus and later contracted pneumonia.
On Wednesday, her representatives posted a statement on her social media accounts in which they announced the As Tears Go By singer had left the hospital and was now resting at home.
“We are really happy to say that Marianne has been discharged from hospital today, 22 days after being admitted suffering from the symptoms of Covid-19,” the statement reads. “She will continue to recuperate in London.
“Marianne thanks you all for your kind messages of concern, which have meant a great deal through what is a such a difficult time for so many (sic). She is also very grateful to all the NHS (National Health Service) staff who cared for her at the hospital and, without doubt, saved her life.”
Harry Potter author J.K. Rowling celebrated the news by retweeted the message and simply adding flower and Champagne emojis, while Gary Kemp of Spandau Ballet tweeted: “Good to hear that Marianne Faithfull is out of hospital after three weeks. Get well soon Marianne!”

(CNN) Singer-songwriter Christopher Cross revealed on social media that he tested positive for coronavirus. Cross, known for his Grammy Award winning hits "Sailing" and "Arthur's Theme," said that he felt it was important to make people aware of how dangerous the virus is. "I'm not in the habit of discussing medical issues on social media," Cross said Friday on Facebook and Instagram. "But I do so in hope this will help other people to understand how serious and how contagious […]