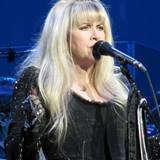 Source: music-news.com
Stevie Nicks: ‘Losing Ruth Bader Ginsburg is like losing my mother’
Stevie Nicks has lamented that she never got to “stand in (the) grace” of iconic U.S. Supreme Court Justice Ruth Bader Ginsburg following her death.
The 87-year-old judge, a champion of gender equality and women’s rights, who lost her battle with pancreatic cancer at her home in Washington, D.C., on Friday, and the Fleetwood Mac front woman posted a heartfelt diary entry on her social media pages sharing her “great regret” that the pair never met.
“She was my hero. She fought for me, and all women,” the Stand Back hit maker penned. “I feel today very much like I felt on the night my own mother died. I feel like someone punched me in the stomach.”
She continued: “I so believed that she would live for a few more years… As with all legends, you think they will live forever, so you will get there in time.
“It is my great regret that I did not make the effort to go and try to meet her,” Nicks confessed. “I did not get to meet her. I did not get to stand in her grace.”
Honoring Ginsburg as a “political rock star,” the Gypsy star wrote: “As a two-time Rock and Roll Hall of Fame inductee, the first female to be inducted twice… I Stevie Nicks induct Ruth Bader Ginsburg into the Rock and Roll Hall of Fame of Life.”
The hitmaker was one of the numerous musicians who paid tribute on social media, with singer Mariah Carey writing on Instagram: “Thank you for a lifetime of service. Thank you for changing history. We will never let it be undone. RIP RBG.”
Cher called her “1 OF GREATEST WOMEN IN (American) HISTORY,” while Jennifer Lopez said she was a “strong women for people like me to look up to”. Katy Perry also expressed her sadness via Twitter, writing, “#RIPRBG,” with a broken heart emoji.
Your Priv

Hear Ronald Bell on "The Lost 45s!" Source: RollingStone.com Ronald “Khalis” Bell, the singer, songwriter and saxophonist whose group Kool & the Gang became one of the most celebrated and musically eclectic funk bands in the 1970s and beyond, died Wednesday at his U.S. Virgin Islands home at the age of 68, a rep confirmed to Rolling Stone. A cause of death was not disclosed. Over the course of 23 albums, starting with 1969’s "Kool & the Gang" through the […]