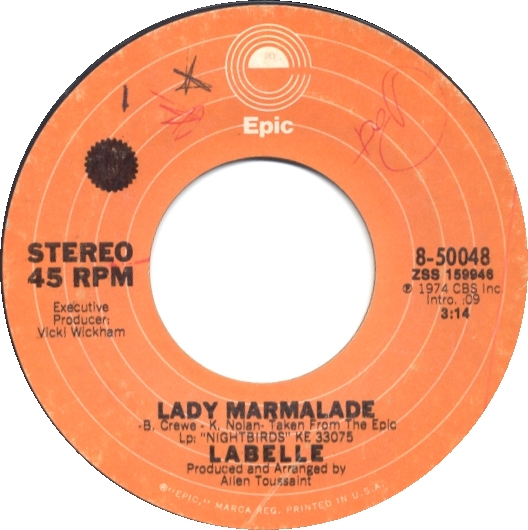 She was 76 years old. Her death was unexpected and the cause was unknown, although she had complained to family that she was not feeling well in the days before her passing, Mayor Reed Gusciora said.

“She was superstar in her own right,” Gusciora said. “She could have gone anywhere after her fame and success and she chose to come back to her roots in Trenton.”

Dash was among two dozen honorees being inducted in New Jersey’s Hall of Fame during a virtual ceremony next month. Her hit 1974 song “Lady Marmalade” was inducted into the Grammy Hall of Fame in 2003.

The seventh of 13 children born to a pastor and nurse, Dash started off her career with the girl-group Del Capris and later teamed up with Grammy-award-winner Patti LaBelle. She went on to tour alongside Keith Richards of The Rolling Stones.

In 1978, she released a self-titled debut album, which included the disco hit “Sinner Man” and was signed to Manhattan Records in 1988, releasing the album, “You’re All I Need.”

Dash, who credited music with changing her life, began singing in grade school and won her first contest at a nightclub called the Crossing Inn.

She studied violin and was the only Black girl in orchestra, according to a profile of her in the Community News.

“Music has been the thing that really heals my spirit,” Dash told the outlet.

While Dash lived in places such as Washington D.C., Las Vegas and New York, she was always drawn back to the capital city, where she lived in her childhood home in Trenton’s West Ward.

In 2017, she was named the capital city’s musical ambassador by then-Mayor Eric Jackson.

“Sarah is truly a music legend and we consider her a brilliant blessing for our city,” Jackson said at the time.

She was a mainstay at city events and performed at the Levitt Amp Music Series in Mill Hill Park.

“I understand [music’s’ potential to impact the intellectual, social, and emotional development of our city’s children, and I want to use my God-given gifts to teach them how to embrace the life-changing power of music,” Dash told NJ Spotlight.

“She was beloved in Trenton because she never hesitated to use her talents to improve the lives of Trenton residents, whether it was by promoting the arts in the local community, or more recently, stepping up as a role model during the coronavirus pandemic and using her voice to encourage everyone to get vaccinated,” Mercer County Executive Brian Hughes said in a statement issued Monday. “She was an inspiration to so many and she will be missed.”

Gusciora said Dash’s commitment to the city is everlasting.

She was among the prominent Trentonians who the mayor tapped earlier this year to get the COVID-19 vaccine at CURE Insurance Arena as city officials sought to combat vaccine hesitancy.

Dash, never shy about getting glammed up, showed up in a fur coat and hat, pearl necklace and sequined masked.

“She’s traveled the world and had so much more fame in her own right,” Gusciora said. “Wherever she went, she just brought joy. She let her music do a lot of her talking.”

Gusciora said the city hopes to honor Dash’s life in a big way in the coming weeks.

“It’s a devastating loss for the city. We would just like to be there to celebrate her life and legacy,” he said.

source: music-news.com Sir Rod Stewart has joked that he would have happily played to a room full of coffins amid the pandemic. The 76-year-old rocker has missed performing on stage so much these past 18 months that he would jump at the chance to play to any audience, even a load of coffins, because he's so "desperate" to hit the stage. Speaking to the Daily Express newspaper, Rod - who […]