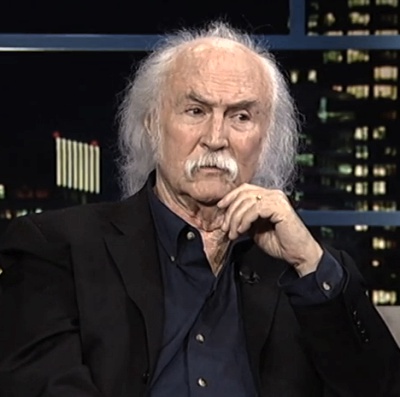 David Crosby has advised budding musicians to “not become a musician”.

The 80-year-old rock legend has become disheartened by the music business, in particular, streaming services like Spotify, which he says don’t pay artists “properly”.

And while David wishes he didn’t have to give the “s*****” advice, he has “no hope” that the industry is going to change.

When asked what advice he’d give to the younger generation, he said: “Don’t become a musician.”

David accused Spotify of banking “half my income”.

He expanded in an interview with Stereogum: “I don’t like Spotify. I don’t like any of the streamers, because they don’t pay us properly. Their proportion is wrong. They’re making billions with a ‘b’ and they’re paying out pennies with a ‘p.’

“That’s not OK. It’s not OK in that it took away half my income, and it’s not OK in that, especially, it makes it impossibly difficult for young people to make it in the business. It doesn’t pay them anything. It’s wrong.”

“Some bright-eyed young kid who has talent. To the Becca Stevens and the Michelle Willises and the Michael Leagues of this world? To my own son James? I don’t want to say that to them, and it is the truth. I don’t hold out any hope for it at all.”

The former Crosby, Stills, Nash and Young star insists he’s only continuing to make music to “uplift” others and will probably have to sell his home to pay the bills in the future, because he can’t tour due to his “fragile health”.

He said: “What James and I are doing, and what the Lighthouse Band are doing – we’re making records anyway, because we love making records and because we think music is a lifting force … I think these are really hard times, and people need the lift. I’m making music because music makes things better and it makes people happier. That’s good enough for me. If I don’t get paid, I don’t get paid.

“It’s OK for now. I’m going to run out of money in a couple of years and then I’ll have to sell my house. That’s just how that is. I can’t do s*** about it. I can’t play live anymore. I’m 80 years old and I’m very fragile health-wise. I can’t change the marketplace.”

David bemoaned that he’s “done” with the “scummy people” at Spotify.

The musician, along with Stephen Stills and Graham Nash, recently backed former bandmate Neil Young when he removed his music from the streaming service in protest over Joe Rogan’s podcast allegedly spreading coronavirus and vaccine misinformation.

And though Spotify promised to make changes after a string of artists followed Neil’s lead, David isn’t expecting much to happen.

He said: “They’re not going to suddenly develop a sense of moral responsibility. They’re scummy people…

Source: music-news.com Bjorn Ulvaeus was spotted busking at a train station. The ABBA hitmaker confused commuters when they saw him singing and playing an acoustic guitar with a tip jar at a metro station in the Swedish capital city of Stockholm dressed up as a cowboy. The 76-year-old hitmaker - who is reported to be worth over a £100 million after selling 400 million albums across the world - was […]