Dolly Parton, one of popular music’s most beloved stars, is taking herself out of the running for the Rock & Roll Hall of Fame’s 2022 class of inductees.

In a statement shared to her social media accounts, the country chanteuse said that while she was “extremely flattered and grateful” for the nomination, she didn’t feel she’d “earned that right.”

“I really do not want votes to be split because of me, so I must respectfully bow out,” she said.

Parton was the sole country star on this year’s ballot, which also included Eminem, A Tribe Called Quest and Dionne Warwick.

She said she hoped the hall of fame would consider her again one day if she’s “ever worthy.”

“This has, however, inspired me to put out a hopefully great rock ‘n’ roll album at some point in the future, which I have always wanted to do!” she said, noting her husband, Carl Dean, “has always encouraged [her] to do one.”

The Rock & Roll Hall of Fame has made an effort in recent years to nominate and induct artists who aren’t traditional rock artists but have made major contributions to popular music and influenced other musicians. Previously inducted artists who align more with other genres include The Supremes, Johnny Cash and Madonna. But it wasn’t until 2007 that the hall of fame inducted its first rap group, Grandmaster Flash and the Furious Five.

Earlier this year, when announcing the newest slate of nominees, Chairman of the Rock and Roll Hall of Fame Foundation John Sykes said the artists chosen each had “a profound impact on the sound of youth culture.”

The current criteria for inductees doesn’t require them to record within the rock genre — to be eligible, artists must have released their first commercial recording 25 years earlier.

This year’s inductees — now down one likely shoo-in — will be announced in May, with an induction ceremony to follow in the fall. 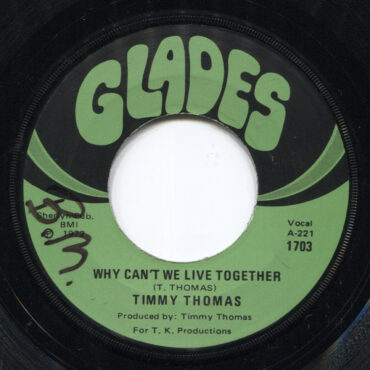 Source: soultracks.com By Chris Rizik (March 12, 2022) Timmy Thomas dead at 77. He was best known for creating one of the most enduring songs of the 1970s – a song whose meaning still resonates in 2022. Today we say a sad goodbye to singer and musician Timmy Thomas, who topped the charts in 1972 with the mesmerizing plea for peace, “Why Can’t We Live Together.” He was 77. The […]