Julian Lennon has had a “love-hate relationship” with the Beatles classic ‘Hey Jude’.

The 59-year-old musician – the son of John Lennon and his first wife Cynthia – has revealed that the song serves as a “dark reminder” about his parents’ divorce after it was written for him by Sir Paul McCartney.

Speaking on the SiriusXM radio show ‘Debatable’, Julian explained: “I wasn’t really aware of what was going on except when I started seeing Yoko (Ono) around, obviously that made a bit of an impact and apparently I struggled with the separation a great deal at five.

“I would have raging moments of being a screaming child but those moments haven’t stuck with me.

“For me it has always been about moving forward, protecting mum the best that I could and making her proud, keeping an eye on her, arms around her, protecting her all the way up until the end, she was my priority.”

The ‘Too Late for Goodbyes’ hitmaker also explained how the track inspired the name of his latest album, titled ‘Jude’.

Julian explained: “The album allowed me to explain what ‘Hey Jude’ meant to me because the fact of the matter is it was a love-hate relationship, I thought I had heard it enough.

“I am thankful to Paul for writing it and putting some hope behind what was to come, but the downside of it was it was a dark reminder of what actually went down at that time, the separation.”

Lennon revealed how he was filled with pride after watching the recent Fab Four documentary ‘The Beatles: Get Back’.

He said: “After watching the documentary there was such pride seeing dad the way I used to know him as a kid, remembering him and seeing him being a goofy b***** but also being such a great writer, performer and singer.” 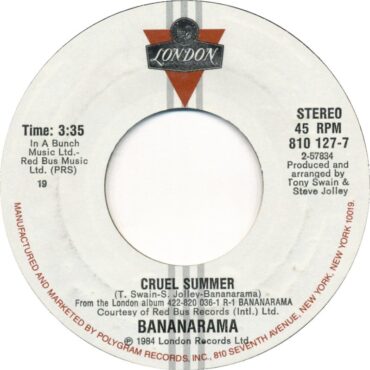 Source: music-news.com Bananarama are set to release a new album to mark their 40th anniversary. The pop duo - made up of Sara Dallin and Keren Woodward - have released the new single, 'Favourite' today the pair's first new music since their 2019 comeback LP 'In Stereo'. The electro-pop song was originally featured on Sara's singer-songwriter daughter Alice Dallin-Walker's (Alice D) 2018 LP 'Narcissus', and she still features on the […]