Hear William Hart on “The Lost 45s” on our interview page!

William “Poogie” Hart, the lead singer and songwriter for the celebrated Philadelphia soul outfit the Delfonics, has died. He was 77.

Hart’s son, Hadi, confirmed his death to Rolling Stone, saying the singer died from complications during surgery on Thursday, July 14. “His music touched millions, continues to touch millions,” Hadi said. “His body might not be here, but his music will live forever. He was a great man, he loved his family, he loved God, and he just loved people. Great heart, great spirit. That was my dad.”

Hart and the Delfonics rose to prominence at the end of the Sixties and hit their stride in the early Seventies, blending rich orchestral arrangements with funk and R&B influences (they helped pave the way for the even more resplendent version of the “Philly soul” sound that emerged alongside disco later in the decade). With Hart’s songwriting and signature falsetto leading the way, they notched hits with songs like “La-La (Means I Love You),” “Didn’t I (Blow Your Mind This Time),” and the widely sampled “Ready or Not Here I Come (Can’t Hide from Love).”

Growing up in Philadelphia, Hart sang in a variety of groups as a teenager before founding the Delfonics (first known as the Orphonics) while still in high school with his brother, Wilbert Hart, and their friend Randy Cain. Eventually, they linked with songwriter and producer Thom Bell, who paired Hart’s tunes with the lush, refined arrangements that would become the Delfonics’ signature sound.

The Delfonics released singles in 1966 and 1967, but finally scored a breakthrough in 1968 with “La-La (Means I Love You),” which peaked at Number Four on the Billboard Hot 100. Subsequent singles like “I’m Sorry,” “Break Your Promise,” and “Ready or Not Here I Come,” cracked the Top 50 on the Hot 100, and climbed even higher on the R&B chart. Their next major hit, “Didn’t I (Blow Your Mind This Time),” arrive in 1970, hitting Number 10 on the Hot 100 and eventually winning the Grammy for Best R&B Performance.

Between 1968 and 1974, the Delfonics released five studio albums and had 12 songs crack the Top 20 on the Billboard charts. In 1975, however, the group split quite literally — Wilbert Hart and Major Harris (who replaced Cain in 1971) started one version of the Delfonics with Frank Washington, while William Hart led his own version of the group (members would even jump between groups over the coming decade as they continued to tour).

In the Nineties, the Delfonics enjoyed a bit of a revival thanks in large part to the Fugees, who reinterpreted “Ready Or Not Here I Come” for their 1996 hit, “Ready or Not.” Missy Elliott sampled the same song on “Sock It 2 Me,” while the Notorious B.I.G. track “Playa Hater” boasted a sample of the Delfonics’ “Hey! Love,” and Prince even covered “La-La (Means I Love You)” on his 1996 album Emancipation. “La-La” and “Didn’t I” also featured prominently in Quentin Tarantino’s 1997 movie, Jackie Brown.

Hart continued to perform, tour, and even occasionally record with the Delfonics well into the 2010s. In 1996, he linked up with Ghostface Killah to provide backing vocals on the Ironman cut, “After the Smoke Is Clear.” And in 2013, he partnered with producer Adrian Younge to record a new album, Adrian Younge Presents the Delfonics, which lovingly paid homage to the Delfonics’ original sound with some contemporary flourishes.

In a 2013 interview with Wax Poetics, Hart reflected on his career and noted the Delfonics’ Grammy win for “Didn’t I” was certainly a major high-point — but not the highest. “[T]here’s always this little lurking thing in the back of my mind,” he said. “I was riding down the street in my car and I heard the first song that I ever recorded for the first time on the radio. And I couldn’t believe I was hearing myself on the radio, and that sticks in my mind. It’s like something that never goes away. I remember the time of day it was, I remember exactly where I was, and it was amazing to hear, you know? It was ‘He Don’t Really Love You’ — that was the first hit, the first song we put out. So when I heard that on the radio, that was the highlight of my life, even above getting the Grammy.” 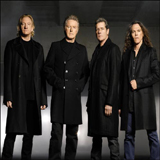 Source: music-news.com Three men have been charged with conspiracy to sell Don Henley's stolen lyric sheets for the Eagles' 'Hotel California' LP. The manuscripts were lost in the 70s and came to be in the possession of three males, who were indicted on Tuesday (12.07.22) by a Manhattan district court attorney, in the 2000s. They had tried to sell the sought-after manuscripts at auction and even to Henley himself, who […]