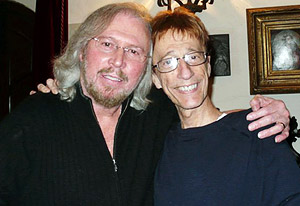 Robin Gibb, formerly of the Bee Gees, is reportedly battling liver cancer, according to multiple British outlets. Gibb, 61, has been undergoing treatment for several months and was rushed to the hospital last week after an emergency call was placed from his home. He returned home five hours later and was joined by his mother, Barbara, 91, and surviving brother, Barry, 65, who flew in from the U.S.

"I have been very unwell and am now on the road to recovery," the singer, 61, says in a blog post on his website.

Gibb, whose iconic disco act is one of the best-selling groups of all time, thanked fans of his music for their "prayers and good wishes," which he says were like a "great tonic to me."

"I wish to thank my family, friends and fans and the many thousands of people who do not know me but have enjoyed our music and have wished me well," he writes. "I am very touched by your love, kindness and support. This concern from people all over the world has demonstrated the depth of feeling and love that the Bee Gees have achieved over the years."