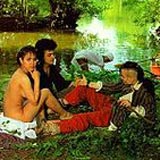 Bow Wow Wow were around officially for just three short years from 1980 to 1983, recording three albums (one of which was cassette only) and scoring a number of international hits including "I Want Candy."

For the first time in almost thirty years, the group will tour the U.K., starting April 19. No plans have been announced for the U.S. as of yet.