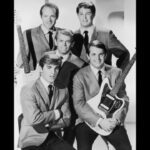 Earlier this year, they put aside their differences to reunite in a very public way: on-stage at "The 54th Annual Grammy Awards." That was followed by the release of their first album of new material in 20 years, and an extensive worldwide tour to celebrate their 50th anniversary. All five members -- Brian Wilson, Mike Love, Al Jardine, Bruce Johnston and David Marks -- seemed genuinely excited when talking about their reunion.

But good vibrations may now be a thing of the past. Just before the Grammy Museum celebration, Love and Johnston issued a press release announcing they would be hitting the road with their own incarnation of the Beach Boys. According to the tersely worded statement, "The post-50th anniversary configuration will not include Brian Wilson, Al Jardine and David Marks. The 50th Reunion Tour was designed to be a set tour with a beginning and an end to mark a special 50-year milestone for the band."

A blindsided Wilson said, "I'm disappointed and can't understand why he (Love) doesn't want to tour with Al, David and me. We are out here having so much fun. After all, we are the real Beach Boys."

The Brian Wilson-Mike Love version of the Beach Boys has just arrived in London for the final two dates of their reunion tour. If the splintered Beach Boy factions can't come to an agreement about their future, the September 28 concert at Wembley Stadium may be the last we see of this particular lineup.